It’s no secret that streaming has taken over the music world. In 2018, audio on-demand streams grew to 534 billion, while album sales dropped 18%. The two most popular services, not surprisingly, are Spotify and Apple Music. Spotify’s user base tops 100 million worldwide, whereas Apple Music has 60 million users and is more popular in the United States.

That’s all well and good, but what option is right for you? Before we go too far, if you want a free service it’s Spotify. Apple Music doesn’t offer a free tier of its streaming service, so the comparison is moot if you’re not looking to spend. If you’re ready to up the ante a little for more access and better features, read more about how the two compare.

Both services are remarkably similar in price and structure, so deciding which one to go for may take a little thinking. Here are the basics:

Which music streaming service is right for you?

The fundamentals of Spotify and Apple Music are quite similar. If you’re looking solely at cost, Spotify and Apple Music plans are the same. Both offer three months free, after which billing is automatic, and you can cancel at any time. Changing your payment info or canceling is easy in either service.  They’re both $9.99/mo., or $4.99/mo. if you’re a student, and the $14.99/mo. family plans allow up to six users.

Both services boast huge libraries, with Apple Music winning out largely due to exclusive deals with artists. Spotify is adding 40,000 tracks a day, so in theory, it’ll only be a couple of years before they’ve got as many songs as Apple Music.

Apple Music can claim more exclusive content. Spotify has a better bead on music discovery. Apple Music is better on downloads, and Spotify wins in the social arena.

Both services have mobile apps for both Android and iOS and standalone apps for PCs and Macs, and there are web-based players that do well on your computer if you can’t install the app. Aesthetically, Apple Music sports a clean white look, while Spotify goes dark with a black background. Both apps allow you to look at lyrics (if they’re available). However, Apple Music lets you search for lyrics, which is nice if you don’t know the title of a song.

Both Spotify and Apple Music allow you to save and download tracks, but Spotify limits you to 10,000 songs, whereas Apple Music allows you to save up to 100,000 songs. This may be a consideration if you like saving every single thing you hear. Spotify can potentially deliver higher quality at a maximum of 320 kbps versus Apple Music’s 256 kbps. As far as whether you can hear the difference, probably not.

Apple Music can run on a variety of devices, and so can Spotify. Spotify is specifically available on Amazon Echo, Bose products, Google Home, Sonos and way more. Meanwhile, Spotify apps work on any Android device, iPhone, PC or Mac, as long as it meets the system requirements. Apple Music apps are compatible with basically any phone or computer, and they’re available on Fire TV, Amazon Echo, Apple Watch, AppleTV and the HomePod.

When it comes to personalization, Spotify and Apple Music are again quite similar. Both have family plans, so multiple users can have custom accounts, tailor content to your preferences and provide plenty of control over settings and audio.

Spotify offers quality, volume and equalizer settings in the audio section. You can control your settings in a more roundabout way with Apple Music.

As far as music discovery, both services use algorithms based on your preferences to show you new music you may be into. Spotify’s Discover Weekly is probably the most sophisticated version of this process, but Apple Music also has human-curated playlists like New Music Daily or Melvins: Next Steps and Beats 1 Radio, which features DJs and exclusive artist interviews.

You can create and share personalized playlists on both services, but Spotify’s social game is a bit stronger, letting you follow your friends as well as artists, and even re-share playlists shared by your friends.

Apple Music outpaces Spotify in integrating with your current library. Apple Music allows you to make playlists with downloaded music that doesn’t come from the service, alongside music that does. This creates a seamless experience that Spotify really can’t offer—something worth considering if you have a large library of rare music.

Both Apple Music and Spotify have been trying to secure exclusive content in the form of artist deals and exclusive podcasts. Spotify is expanding its lineup of exclusive podcasts, and Apple Music is looking to do the same. Meanwhile, Apple Music has been working hard to get exclusives with major artists for a long time now, and although Spotify’s original strategy was to forego paying for exclusives and instead lure artists with a bigger platform, it has made some deals of its own.

Spotify and Apple Music’s family plans are convenient for saving money if you’re working with multiple users. If you already have an Apple account, you can get Apple Music $100 a year.

Spotify and Apple Music are chock-full of great features, but each has its disadvantages. Apple Music’s interface has been called cluttered and confusing. Also, the streaming service doesn’t offer a free version and Apple FairPlay Protection (the method Apple uses to keep you from sharing your downloaded tracks) on downloads can make things difficult.

As for Spotify, you can’t download songs as MP3s or integrate your other downloaded songs into its player. And the free version of the mobile app forces shuffle play for many tracks and albums.

Aaron Trumm has been writing, creating content, and producing media, online presences and music for 25 years. He is the founder and head of NQuit Music, holds a master’s degree from Stanford University, and was once the 10th ranked slam poet in the world. He's written for publications like Recording Magazine, Linux Journal, Computer Music Magazine, and SonicScoop, to name a few. He also enjoys sports and fitness so much that he's a certified personal trainer and often writes in that area as well.

Video and music streaming bundles: What options are available? 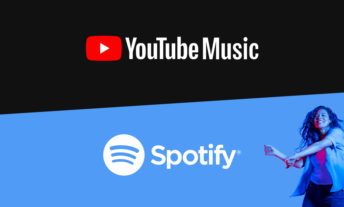