Amazon Gives Prime to Every Household in Manchester-by-the-Sea

This week sees the Amazon Prime streaming debut of Manchester by the Sea, the Academy Award-winning drama starring Casey Affleck, Michelle Williams, Kyle Chandler, and Lucas Hedges. That would be a noteworthy addition to the Prime streaming catalog regardless, but Amazon decided to celebrate the occasion by doing something a little special for the residents of the real-life town from which the movie takes its name. So, if you’re a resident of Manchester-by-the-Sea, Massachusetts, check your mailbox this week: you’ve got a free year of Amazon Prime headed your way. And some popcorn! 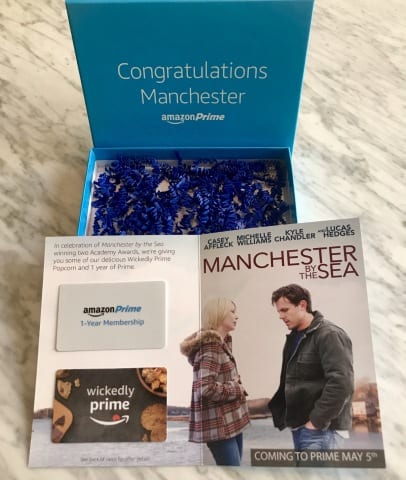 Every household in Manchester-by-the-Sea will be receiving a gift box containing a code for a one-year membership to Amazon Prime (a $99 value) and a three-pack of Wickedly Prime Popcorn. Greg Hart, Vice President of Amazon Video, worldwide, announced the news in a press release today, saying:

Manchester by the Sea was written and directed by Kenneth Lonergan (You Can Count on Me). Casey Affleck stars as a troubled man with a dark past whose life is upended after the death of his brother, which leaves him responsible for caring for his teenaged nephew (Hedges). The film took home Academy Awards for Best Actor (Affleck) and Best Original Screenplay, and was also nominated for Best Picture, Best Director, Best Supporting Actor (Hedges), and Best Supporting Actress (Williams). Amazon Studios co-distributed the film, along with Roadside Pictures.

Manchester by the Sea premieres on Amazon Prime Instant Video this Friday, May 5.