An Average UFC Broadcast: About 6 Hours Long with Only 2 Hours of Fighting

The UFC has a problem. Its TV events are too long and poorly paced. It’s a problem fans have complained about for years, but nothing has been done to improve the situation. If anything, it’s only gotten worse.

Here’s how the typical UFC event goes. You sit down to watch the prelims in the early evening or late afternoon. By the time, the main card rolls around, it’s dark out, usually around 9 or 10 pm Eastern Time. By the time the main event begins, it could be well past midnight. And all during that time, you’ve been exposed to hours of commercials, promos for upcoming events, interviews, and other content that isn’t fighting.

It’s a marathon that even the most hardcore fans can barely complete.

The Anatomy of a UFC Broadcast

We decided to do in-depth analysis of every UFC broadcast of 2018 (through UFC 228 on September 8) to put some cold, hard numbers around the company’s pacing issues with its broadcasts.

Here are some of our key findings.

Only 36% of a typical UFC broadcast contains fighting

The majority of a UFC broadcast is made up of commercials, interviews, commentary between fights, promos for upcoming UFC events, and other non-fighting content. 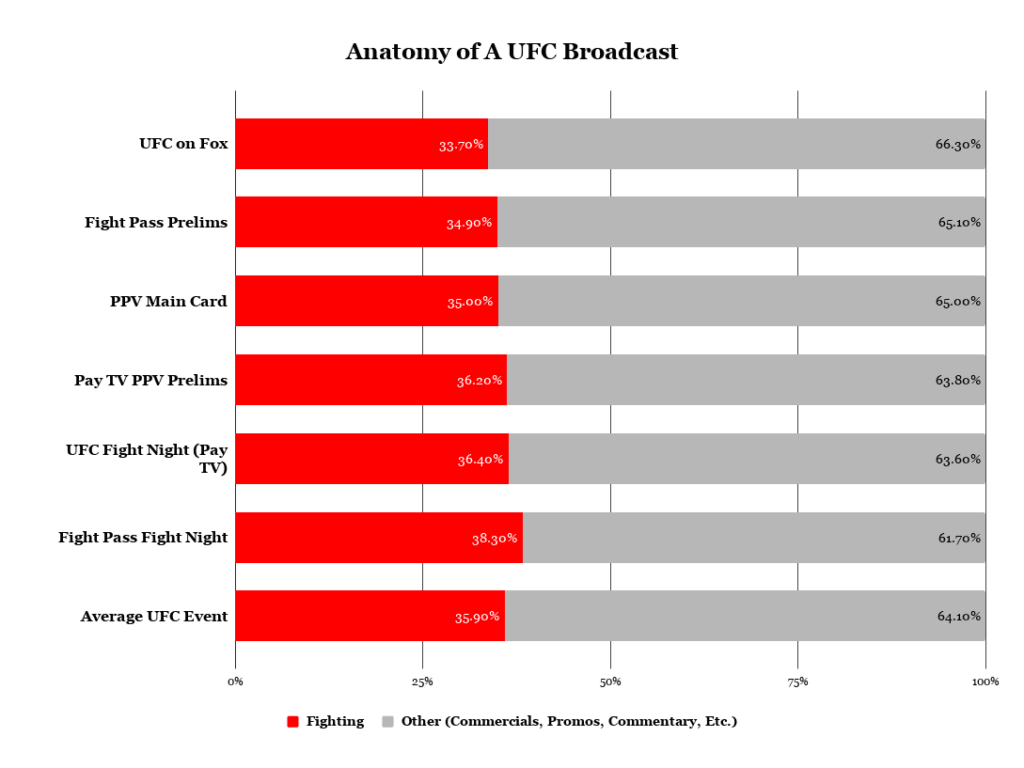 After analyzing every UFC broadcast so far in 2018, we found that all of them suffer from pacing issues.

Perhaps not surprisingly, the UFC on FOX events suffer most from pacing issues, with only 33.7% of these broadcasts containing fighting in the octagon. This makes sense as events on a major broadcast network like FOX seem likelier to have more commercial breaks and may require more time in between fights to get new, casual viewers invested in the event.

It’s also not surprising that the events with the “best” pacing were Fight Nights that streamed exclusively on the UFC’s streaming service Fight Pass, where standard commercial breaks aren’t required. Although, it’s worth pointing out that the sample size of Fight Pass exclusive events is significantly smaller than other categories we looked at since these don’t occur as often.

What might be most frustrating to fans is that pay-per-view events, which shouldn’t be slowed down by the constraints of broadcast or cable television, are still just as poorly paced as everything else. That’s a tough pill to swallow when you’re doling out $60 for a PPV card.

You could binge the entire Star Wars trilogy in the time it takes to watch some UFC broadcasts. 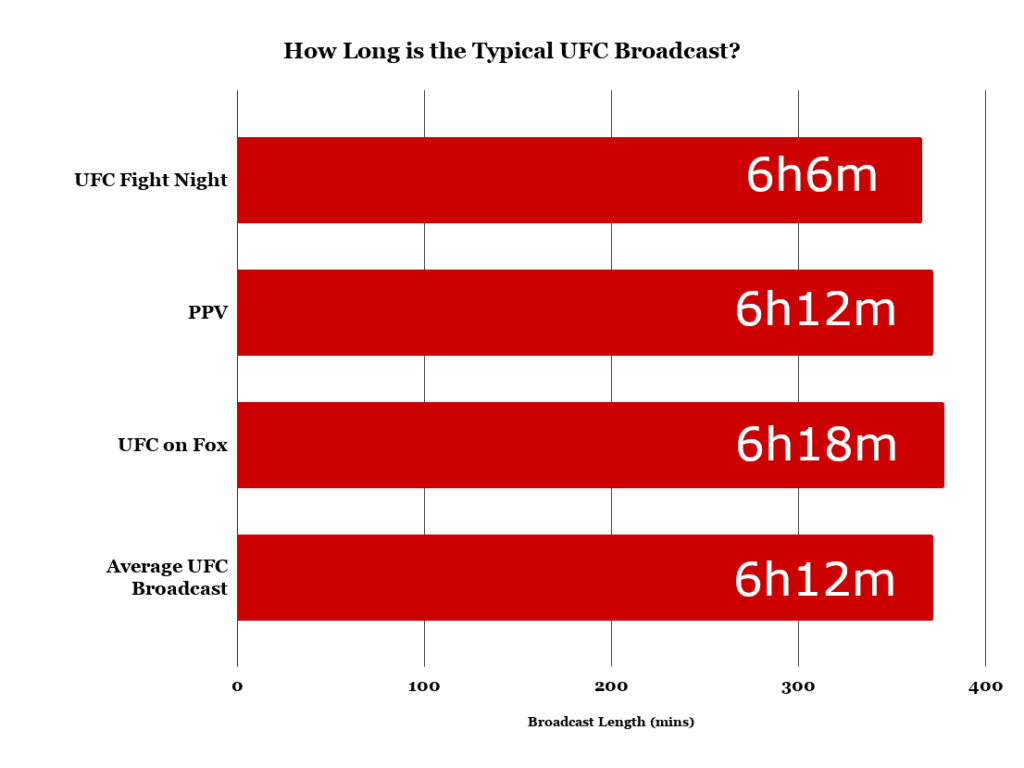 UFC broadcasts are a marathon. Every single category of UFC broadcast, whether it’s a Fight Night, PPV event, or FOX special, has an average runtime of over 6 hours. To put that in perspective, the runtime of the entire original Star Wars trilogy is 6 hours, 17 minutes. That’s a minute shorter than the average UFC on FOX event lasts from start to finish (including the prelims).

To further put this into perspective, the average UFC event we looked at has 12 fights. At an average runtime of 6 hours, 12 minutes per broadcast, that means you see just under 2 fights (1.9 to be exact) per hour when watching a UFC event.

A Flicker of Hope?

Earlier this year, the UFC reached a new television deal with ESPN. Starting in 2019, UFC events will no longer air on FOX, instead showing on ESPN‘s various networks as well as their ESPN+ streaming service.

Here’s the part that gives fans a reason to be hopeful. Renowned MMA reporter Luke Thomas tweeted in July that ESPN’s TV pacing for UFC events will improve.

I’ve been told that ESPN’s TV pacing will be better than what we’ve seen tonight. I’m also told ESPN+ will be even better than that. Can’t happen soon enough.

Here’s to hoping that’s the case. Until then, fans will have to continue tolerating lots of commercials and non-fighting content if they want to watch UFC events live.