Report: 49% of Pay TV Subscribers Might Leave Their Current Providers in the Next 6 Months

High prices, poor customer service, and an increase in streaming services are causing more consumers than ever to think about ditching or switching their cable or satellite TV service. According to a new report from TiVo, a whopping 48.9% of pay TV customers are thinking about leaving their current providers within the next 6 months.

TiVo’s Q1 2017 Video Trends Report analyzes the behavior of pay TV users. The survey has been conducted every quarter since 2012 to help track consumer trends over time in the pay TV industry. This latest report spells more trouble for cable companies as an increased number of customers indicated they are seriously considering ditching their current providers.

When asked if they plan to change their TV providers within the next 6 months, here’s how the survey group responded:

In total, 48.9% of respondents might leave their current cable or satellite provider in the next 6 months. That’s nearly half of all pay TV customers.

So, why are so many consumers thinking about either cutting the cord or at least moving to a different TV provider?

Price continues to be the leading motivator. The average cable TV bill now sits at $103 a month, and of those surveyed who cut their service, 79.7% cited price, saying cable has become “too expensive”.

The increase in cable alternatives is another reason pay TV providers are losing customers. 57.6% of respondents who cut their TV service said they now use streaming services, like Netflix, Hulu, or Amazon Prime to meet their TV needs — a 9.3% increase quarter over quarter. And almost one-third of cord cutters said they use an antenna to get their local channels, like NBC, ABC, CBS, and FOX. 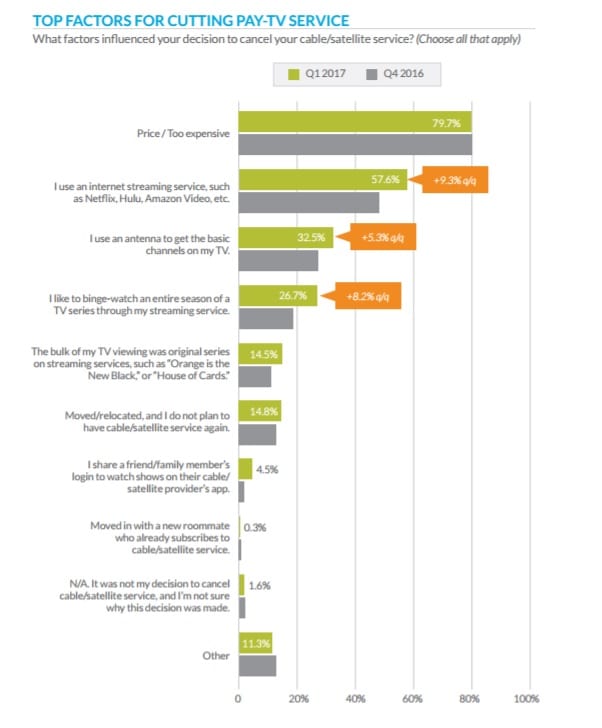 Of course, price isn’t the only reason people might be dissatisfied with their pay TV service and plan on leaving. Other factors for dissatisfaction included poor customer service (let’s not forget Comcast is rated America’s Most Hated Company), poor cable/satellite service, and bad channel selection.

Undoubtedly, pay TV providers have a major problem on their hands. As more customers continue to cut the cord and others are thinking about at least switching to another provider, is there anything cable companies can do to stop this from happening?

The 48.9% of respondents who are planning to cut, change, or switch providers said they would stay with the current provider if some changes were made to improve their service. Most indicated they would stay if an a la carte option was offered to let the customer choose only which channels they wanted, and others wanted a way to integrate all of their TV services (cable and streaming services) into one easy-to-use place. 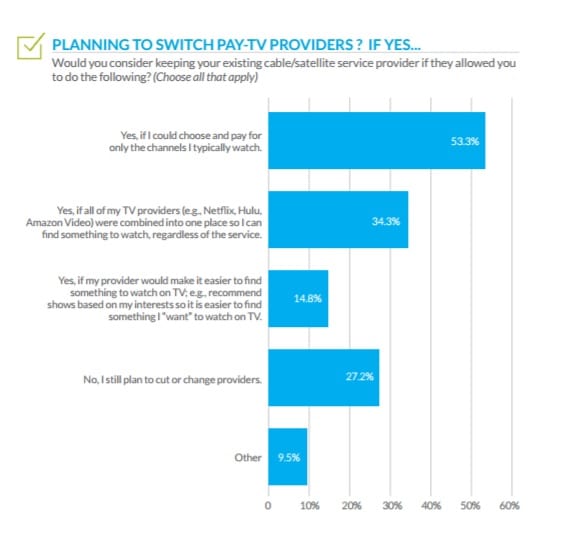 All in all, the pay TV industry continues to be in turmoil, and cable and satellite providers need to act fast if they want to stop the bleeding. You can check out the full TiVo quarterly report here.