The Emmy Nominees Your State Would Vote For Mapped

The Emmys air this Sunday on Fox, and TV’s biggest night will honor the best in television over the last year. The awards show is always a big deal, not just for the casts and crews of the shows nominated, but also for TV fans who often have strong opinions about who deserves to win.

Of course, viewers don’t get to vote to determine the Emmy winners, that’s decided by the Television Academy which is made up of members of the entertainment industry. But what would happen if the average American could vote on the Emmys? Who would win? Would the most popular nominees vary by state?

We partnered with the expert data analysts at Mindnet Analytics to find out. Using Google Trends data from the last 12 months, we were able to find out which Emmy nominees in the major categories each state (and Washington DC) was most obsessed with relative to other states. Precautionary steps were taken to ensure that we only retrieved search frequency counts related to television series and television actresses/actors in Google Trends.

And The Winner Is… 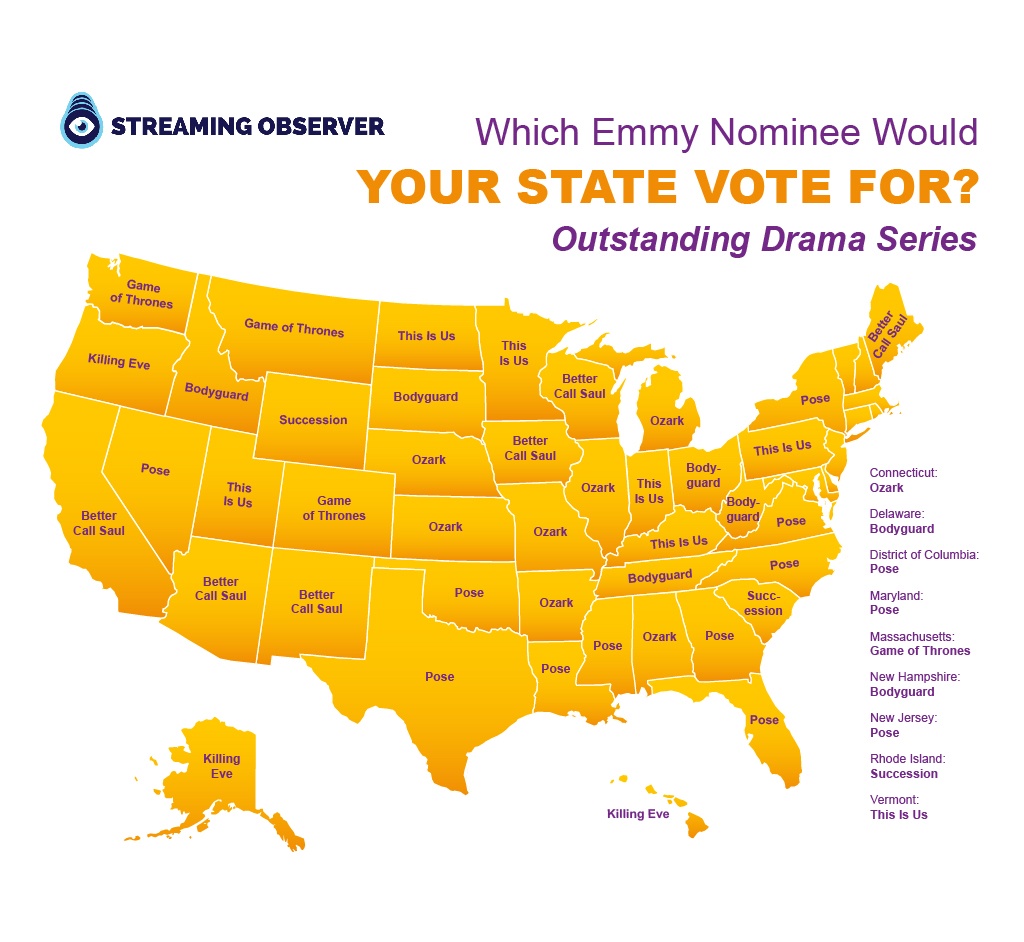 While many believe Game of Thrones will win given that the show ended in May, the reality is the final season was poorly received by many critics and fans alike. In fact, its finale which was nominated in the writing category for a drama series is the lowest rated episode of any show on IMDb to ever receive an Emmy nomination. With all that in mind, it’s not too surprising to see that Game of Thrones wouldn’t be a winner with the public.

FX’s Pose isn’t projected by many experts to win for Outstanding Drama Series this Sunday, but the show was a breakthrough and has received much critical acclaim. Could it pull off an upset at the Emmys as it did here with our analysis? 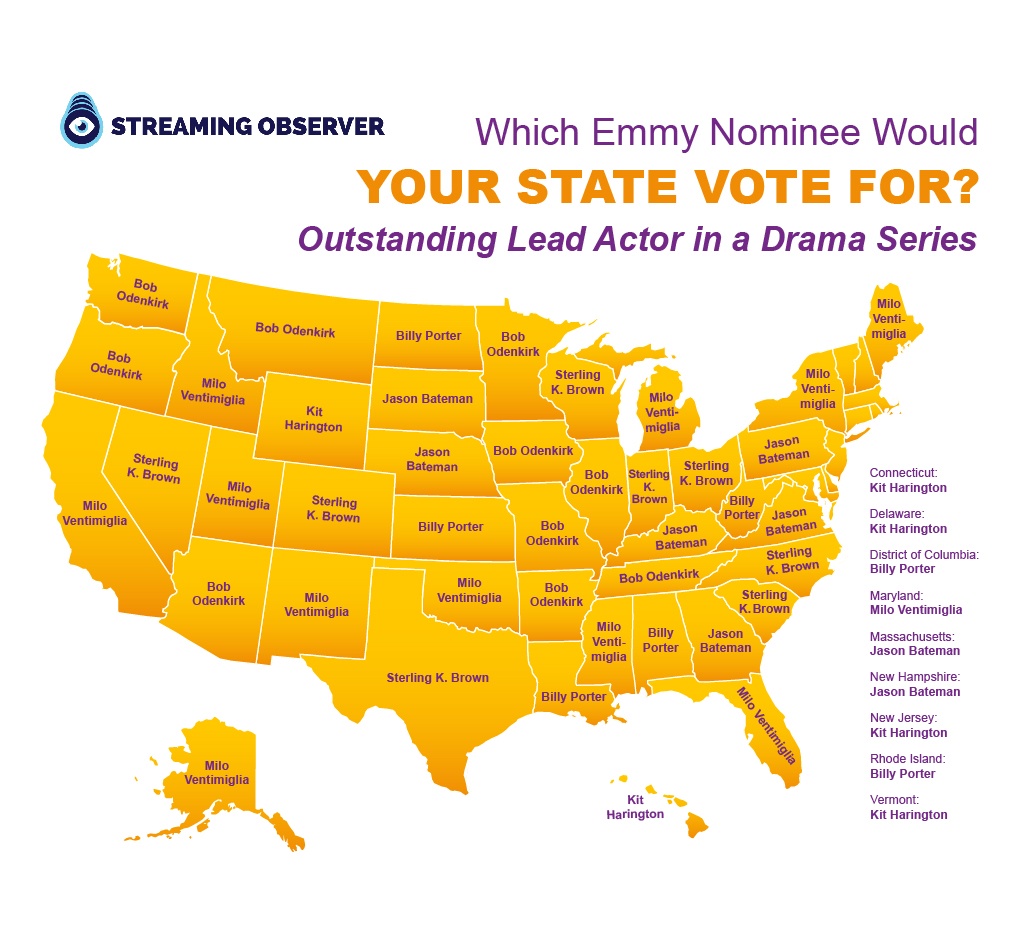 Winner: Milo Ventimiglia (This Is Us)

In a category mostly filled with previous nominees, This Is Us star Milo Ventimiglia won the most states in our data analysis. However, it’s his co-star (and 2017 winner) Sterling K. Brown that most pundits seem to think has the best chance of winning this Emmy. Odenkirk, who tied for second place in our analysis, also has a strong shot of winning Sunday thanks to his amazing performance as Jimmy McGill in Better Call Saul. 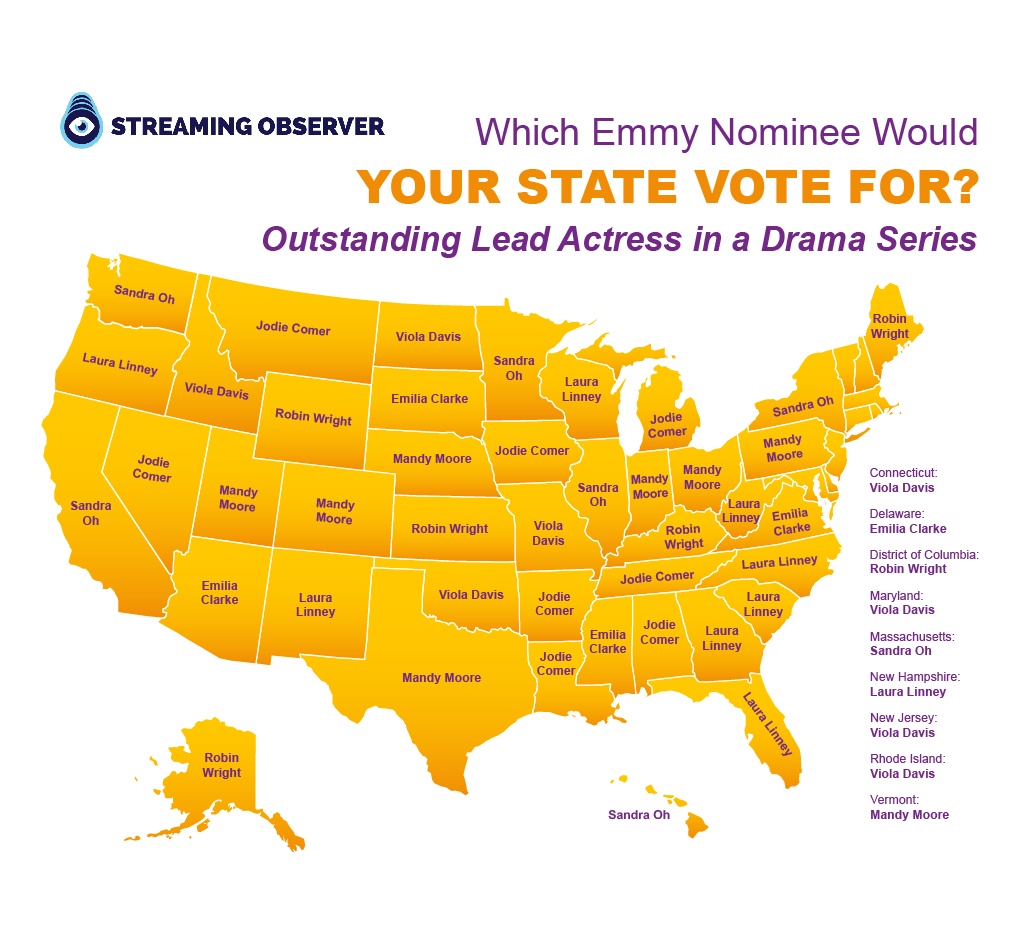 Viola Davis (How to Get Away with Murder) – 8

Emilia Clarke has never won an Emmy for playing Daenerys Targaryen, and if our analysis is to be believed, it’s not going to happen now. Most experts seem to think Oh, who lost out last year to The Crown‘s Claire Foy, will take home the trophy this year, but she was edged out in our analysis by Laura Linney, who has turned in a marvelous performance as Wendy Byrde in Netflix’s Ozark.

While most of our analysis focused on the popular Drama categories, we also took a look at some of the Comedy categories to gauge who Americans would vote for (winner who received the most votes in bold text):

Will you be watching the Emmy’s this Sunday? Who would you vote for if you had the chance? Let us know by leaving a comment below.