The annual New York Comic Con returned over this past weekend, giving attendees new looks at much-anticipated projects such as Netflix’s Iron Fist and the Dark Tower movie. Hulu decided Comic Con was the perfect place to try and build buzz for their upcoming miniseries adaptation of Margaret Atwood’s The Handmaid’s Tale.

Set in a near future, The Handmaid’s Tale is set in the Republic of Gilead, a religious theocracy that has overtaken what was once the United States. In addition to being a rigidly militarized and oppressive society, Gilead is no fun whatsoever if you’re a woman — they’re forbidden to read, subject to harsh Old Testament rules, and many fertile women are essentially kept as breeding stock for the state (the “handmaids” of the title).

Hulu released the first teaser for the miniseries to coincide with New York Comic Con. It’s as stark and unnerving as the world of the Handmaids themselves.

At only 11 seconds long, the teaser definitely leans heavily on “tease.” Still, we do know a fair bit about Hulu’s Handmaid’s Tale miniseries. Mad Men‘s Elisabeth Olsen stars as Offred, a Handmaid assigned to the home of “The Commander” (to be played by Joseph Fiennes). The cast also includes Chuck‘s Yvonne Strahovski as The Commander’s wife, Serena, and Orange Is the New Black‘s Samira Wiley as Offred’s best friend. The series is being executive produced by Bruce Miller (The 100).

Attendees at Comic Con also spotted some creepy viral marketing for The Handmaid’s Tale. As shared on Twitter, stalls in the women’s restrooms at the Con had been “defaced” with the Latin phrase “nolite te bastardes carborundorum,” a line from the novel that translates to “don’t let the bastards grind you down.” In the book, Offred finds the words scratched into the floor of The Commander’s house. It’s a very clever bit of guerrilla marketing, especially since the graffiti didn’t explain what it was promoting, leaving fans to puzzle it out and spread word of mouth. 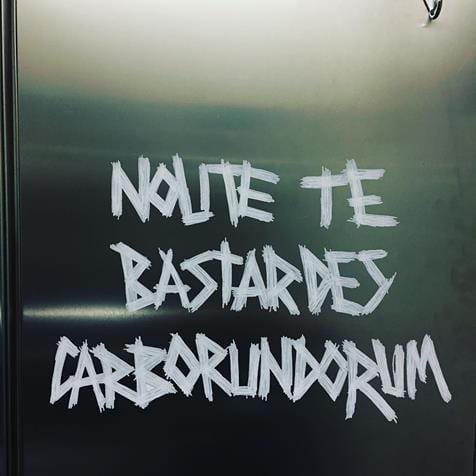 The Handmaid’s Tale should be quite a jewel in Hulu’s crown when it premieres in 2017. Stay tuned to Streaming Observer for more news as it becomes available.