Jeopardy contestant James Holzhauer has now won 19 straight games as of the time of this writing, earning over $1.4 million in the process — more than halfway to Ken Jennings’ record $2.5 million haul from the former champion’s own streak. The most impressive part? Holzhauer has earned that much in just over a quarter the number of appearances as Jennings who won 74 times during his streak. In other words, Holzhauer is winning historic amounts of money each game, so far nabbing 9 of the 10 largest single-game wins in the show’s history.

How has Holzhauer won so much money during his streak?

Simply put, he’s changed the way the game is played, navigating the game board in a way that hasn’t been seen to this extent. A big part of that is his ability to hunt down the Daily Doubles hidden within the board and to bet aggressively on them, only after he’s already built up a significant amount of money answering high-value clues. As of last week, he had found over 80% of the Daily Doubles in his games and answered more than 90% of them correctly, wagering big amounts in the process to drastically increase his winnings.

“I’m definitely not the first player to aggressively attack the Daily Doubles, but I may be the first to consciously try and build a stack before hitting one. The Daily Double can only help you so much if you’re sitting on $1,000 or less, ” Holzhauer said.

The casual viewer might think Holzhauer’s ability to find the Daily Doubles is blind luck, but that’s not the case. The reality is Daily Doubles have a much higher chance of hiding in certain squares on the board than others.

As you can see from the heatmaps below, the Daily Doubles are not distributed equally across the game board (note: percentages have been rounded off to second decimal). 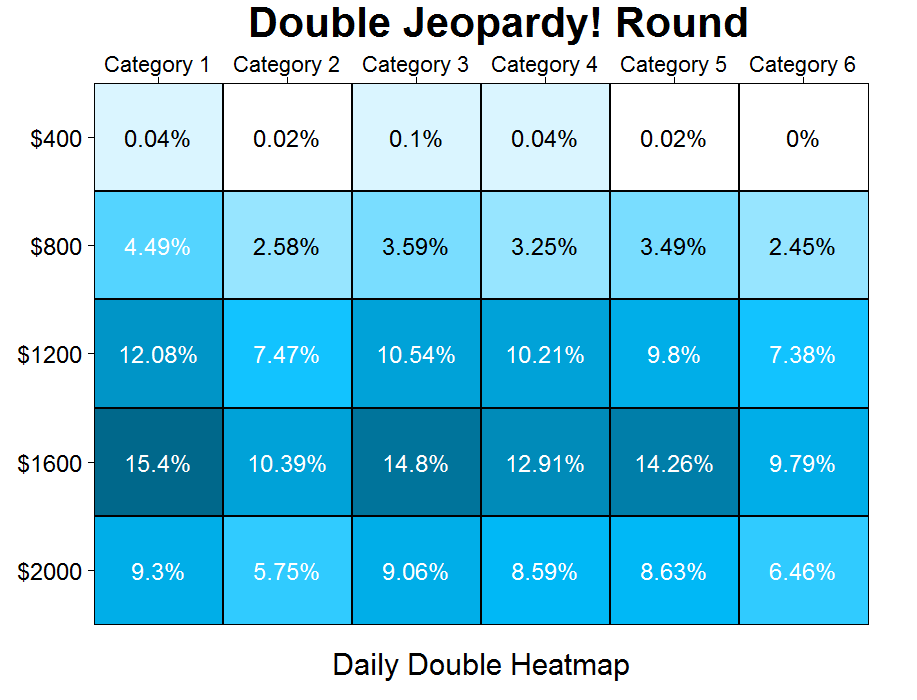 By building a bankroll, hunting down the Daily Doubles, and betting big on them, Holzhauer has been able to build huge leads on competitors that have been insurmountable to this point.

Of course, the question is will other players adopt his strategy and eventually dethrone him using these tactics? Only time will tell.