Netflix has huge plans for 2017, announcing last week that they would roll out 1,000 hours of original content this year. That’s good news if you’ve somehow managed to find a job that pays a livable wage for doing nothing but watching Netflix, but the rest of us are going to have to be a little more picky. For parents of young kids, however, one piece of must-see TV will be Netflix’s reboot of the beloved children’s educational show, The Magic School Bus. All the more so now that they’ve announced who will be voicing the eccentric Ms. Frizzle: multi-talented SNL staple Kate McKinnon. 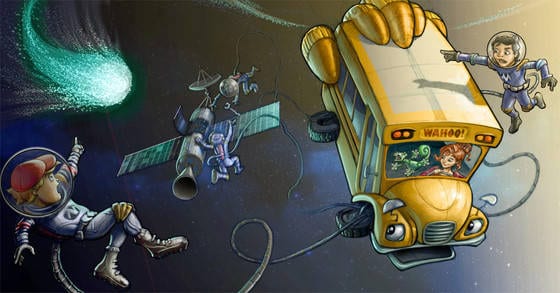 For those unfamiliar with children’s literature or ’90s kids’ programming, the original Magic School Bus premiered in 1994 and ran for four seasons. Based on the books written by Joanna Cole and illustrated by Bruce Degen, it follows Ms. Frizzle, who uses her Magic School Bus to taker her students on field trips to extraordinary locations like different eras, outer space, or inside the human body. The bus can reconfigure itself however needed to fit into the destination, strongly suggesting that it may actually be a stolen TARDIS and Ms. Frizzle a Time Lord (at least according to the Doctor Who fan fiction I’m about to go write).

The original animated series featured Lily Tomlin as the voice of Ms. Frizzle. Given that characters are said to be returning from the original run, and given that Tomlin has an established relationship with Netflix thanks to Grace and Frankie, don’t be surprised if her voice pops up in Magic School Bus Rides Again.