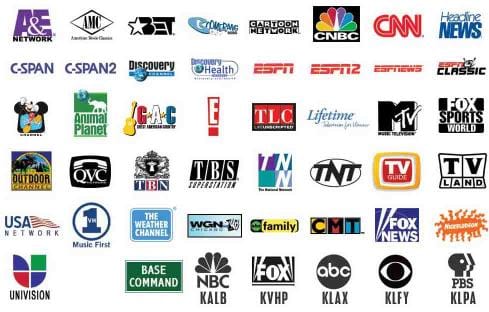 For decades now, major cable carriers have refused to offer their customers the most obvious request. Companies such as Comcast Corporations and Charter Communications have resisted all calls for a la carte channel selection. They have shied away from such options since they sign sweetheart deals with major cable network conglomerates. This business strategy allows them to double-dip on revenue, earning more from customers who unwillingly pay for channels they neither watch nor want. They also receive discounts from cable providers in exchange for carrying less popular channels. It’s an egregious business model that explains why cutting the cord has become so popular in recent years. Let’s examine some of the worst offenders, the cable channels lots of people pay for that they don’t watch.

The first step is to understand the process of how your cable provider sets your channel lineup. In order to acquire major programming staples that have high viewership such as TBS and TNT, your cable operator also agrees to air less desirable networks such as Boomerang, which you may or may not know is a real thing. It’s a channel featuring classic animated programs from the Time Warner archive such as Tom and Jerry and Scooby-Doo.

Boomerang is cheap for Time Warner since they simply mine intellectual property they already own. They sell these stale but comfortable broadcasts to cable operators while also earning advertising revenue from retailers. Even selling channels like Boomerang at a discounted rate, this revenue model is extremely lucrative for Time Warner. Alas, it’s nothing but wasted money for 90 percent of customers. The data bears this out.

Somehow, 43.6 million cable viewers have access to Boomerang, whether they realize it or not. How many of them watch Boomerang on a consistent basis? Statista suggests that 4.66 million cable subscribers peruse Boomerang in a given week. Notably, the ratings for this fringe cable channel are also in free fall. In August of 2009, 6.81 million viewers checked out their programming during a given week. Boomerang has lost 46.1 percent of its audience over the past six years, which circles back to another germane point.

These marginal cable channels are hemorrhaging viewers at a faster clip than the more established networks. Cable customers are paying six years’ worth of price increases for channels virtually nobody is watching, ones that have lose significant demand. If you question this, simply think about Boomerang from a different perspective. Barely ten percent of the people with access to the network watch it during a given week. The other 90 percent are paying for something they don’t use.

Oh, You’re Getting Fries with That. And an Apple Pie, too.

The above is the best possible summary of the madness of cable channel lineups. You wouldn’t walk into a McDonald’s and expect to have to purchase a Big Mac, a salad, and an apple pie when you only want to buy a Happy Meal. The same is true at a Best Buy. When you pick up a new smartphone, they don’t demand that you also order a videogame, a printer, and an external hard drive. You neither want nor need these things, which is why you didn’t place them in your shopping cart. Among all major business models, the cable conglomerate is the only one that dictates what a customer must accept if they want to complete a transaction. The entire practice is madness.

Consider some of the most outrageous offenders. One of the newest cable channels is Fusion. An optimistic attempt to link millennials to a novel style of news organization, Fusion is a joint project of Univision and ABC News, a division of The Walt Disney Company. Targeting Hispanics and bilingual Americans, Fusion started in 20 million homes in 2013. Less than three years later, it has a presence in 40 million homes thanks to generous cable package licenses. Only one problem exists. Virtually nobody is aware of Fusion and the few that are either don’t like it or don’t watch it.

The numbers for Fusion are staggering. Ostensibly a merger of internet and cable news, Fusion’s traffic is virtually non-existent. Gawker unearthed data indicating that more people work at Fusion than read its most popular web articles. That’s not even the worst news for Fusion. Its cable channel is so unpopular that the legendary Nielsen ratings system lacks the technology to measure its viewership. The numbers are simply too low to track. If Fusion is part of your cable package, the odds are astronomical that you are watching the channel.

I Don’t Want My MTV

What are some of the other cable channels that you’re probably not watching that cost you hard-earned money anyway? Some of them might surprise you due to their name recognition. Digitalsmiths, a media analytics company, surveyed 3,000 viewers last June. They asked these cable consumers a simple question. Which cable channels would you pay to watch if you had your choice of a la carte programming? You probably have several answers spinning in your head right now. If you’ll look at this list, however, you’ll notice that 20 (!) different cable channels failed to earn even 10 percent of the vote. That’s out of 74 options, meaning that the average person surveyed pays 20 channels they absolutely don’t want.

Which are the excess channels? You probably aren’t shocked to learn that shopping channels such as QVC and Home Shopping Network are superfluous. Nobody wants to pay to listen to a sales pitch. Those business models seem archaic in the internet era anyway. What about Esquire Network, though? Founded in 1999 as the Style Network, it’s had almost 20 years to build a viewing audience yet has failed to do so. Esquire Network barely edged targeted networks such as Telemundo and Univision in the survey. It lost to an even more specific cable channel, the Tennis Channel. Other poor performers include Fuse, FYI, and Reelz. Even networks with powerful corporations behind them weren’t popular. The Fox Business Channel has little support from voters.

Perhaps the most fascinating revelation from this survey, however, isn’t about the unpopular channels. Even the most popular ones lack universal support. ESPN, the most expensive cable channel at more than $6 per subscription, is only 20th for a la carte rankings. Less than 40 percent of customers indicate that they would pay for ESPN as individual programming, which would blow up the entire cable channel system. This data is the specific reason why stock in The Walt Disney Company performed sluggishly over the past year. Even as other divisions such as movies and theme parks have enjoyed record gains, fear of ESPN’s eventual revenue collapse causes investors to remain wary of Disney as a whole.

The lack of willingness to pay for specific channels is consistent. Out of the 74 channels listed, only seven garnered at least 50 percent of the vote. More troubling is the fact that four of those were network channels rather than cable. Those are the ones viewers can watch via antenna. The only three cable channels that garnered a majority of the vote were Discovery Channel, History Channel, and National Geographic Channel. Clearly, when a la carte service is available, the entire landscape of pay television will change.

How Do We Know These Channels Exist If Nobody Is Watching?

This survey verifies a 2014 study that the average cable package includes 189 channels yet viewers watch only 17 of them. That again indicates that consumers waste 90 percent of the money that they spend on their cable television package. Further proof is this list of the most and least watched television channels.

Almost 20 cable channels fail to reach the most modest viewership total of 100,000 per week. Included on this list are recognizable channels such as VH1 Classic, GAC aka Great American Country, Chiller, ESPN News, and Fox Business Channels. More vaunted channels don’t fare much better. The 100,000-200,000 group includes ESPN U, the Cooking Network, the Golf Channel, MLB Network, and IFC. Perhaps the strongest indicator of how segregated cable channel viewing habits have become is that only 18 of them garner an average of a million viewers a week. That’s out of a list of more than 100.

What customers pay for cable in no way lines up with the amount of channels that they actually consume. That’s why cable carriers are so resistant to the idea of a la carte programming. They know all too well that they’ve padded their bills for 35 years now, and they don’t want their revenue stream to end. The ultimate outcome is that cable subscribers wind up paying for channels like Fusion and Boomerang, ones that have such low viewer counts that Nielsen ratings barely register them. And that’s why cable conglomerates have no interest in adding a la carte packages. They’d lose a staggering amount of their revenue stream virtually overnight.