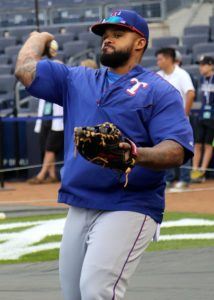 Six time MLB All-Star Prince Fielder may have been forced to retire a little earlier than he planned due to a persistent neck injury, but it looks like he’s already got a little bit of his post-baseball life figured out. He’s revealed to ESPN that he’ll be hosting a new TV show coming to Hulu and Netflix.

Fielder’s playing weight was listed at a hefty 275 pounds, so who better to embark on a food journey with viewers?

Details about the show are scarce (we don’t even have a name yet), but Fielder said the show would have a mixture of baseball players, actors, musicians, chefs and more preparing a dish. At the end of each episode, Fielder chooses his favorite, giving it the “Fielder’s Choice” award. If I had to guess, I’d say the show would be titled Fielder’s Choice.

For now, Fielder has revealed a few guest stars: New York Yankees pitcher CC Sabathia, singer Jose Feliciano, actor Chazz Palminteri, and rapper Xzibit. So it seems like a good mix of celebrities from different genres is on board with this project.

This show is something Fielder has apparently had on his mind for a while now. “A friend of mine asked me a question at the end of 2015,” Fielder said about his new opportunity. “We were going over my finances and setting things up for the future when she said, ‘What do you want to do when you retire?’ I said, ‘I always wanted to do a food show.’ I thought it might be a cool thing to do when I retired a few years later. Then retirement came slightly prematurely.”

An exact release date hasn’t been set, but Fielder said the show should debut on Netflix and Hulu “some time around spring training,” which takes place in February and March.