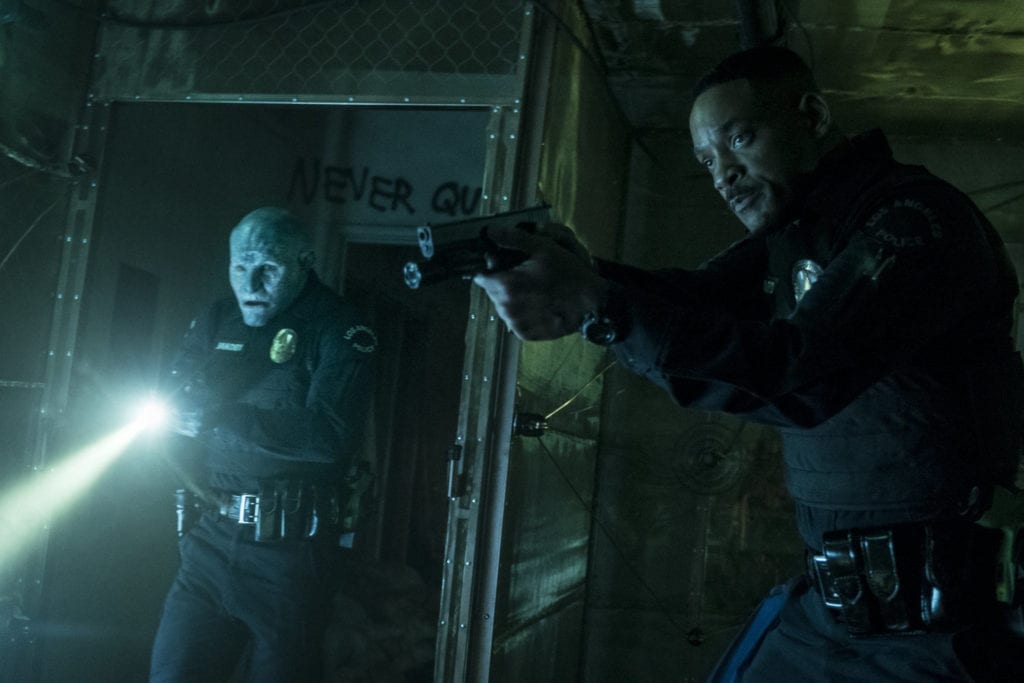 Bright came out of nowhere last week, instantly generating buzz with a teaser trailer for the upcoming Netflix original film starring Will Smith. Bright is set in an alternate version of modern-day Los Angeles where fantasy creatures such as elves and orcs have coexisted alongside humanity for centuries. Smith is obviously the leading man, but Joel Edgerton (Black Mass) also stars as one of Bright‘s leads, and his character is considerably less…human.

Smith plays Scott Ward, a human cop who teams up with the LAPD’s first ever orc police officer, Nicolas Jakoby (Edgerton). While the first teaser gave us only the barest hints of what Bright is all about, Netflix has released several new photos of the cast, including this badass shot of Edgerton in full costume as Nicolas Jakoby: Orc Cop. (Why they didn’t use that title for the movie is beyond me.)

Netflix is also playing things a bit meta with its promotional strategy for Bright. The latest press release for the flick is actually pulled straight from the world of the film, presented as an LAPD press release announcing the hiring of the force’s first ever orcish police officer.

Today, the South Central Los Angeles Police Force announced that Nicolas Jakoby, the first ever Orc Police Officer, joined the department solidifying their commitment to diversity and their acceptance of all communities and races. Jakoby will be partnering with the esteemed Human Officer Scott Ward and providing much needed insight into the Orc community in the Los Angeles area.

‘Orcs have been a part of our society for over a millennia and we welcome all who are ready and willing to serve on the force. Jakoby will be an excellent partner to Ward,’ said Captain Perez.

Speaking to EW, Smith described Edgerton’s character as being like “the Jackie Robinson of orcs. He has to make it go right, or other orcs won’t have a shot. So he’s taking on the social responsibility of being a good cop, with the weight of his people on his shoulders.”

Smith also shorthanded Bright as “Training Day meets Lord of the Rings.” Bright certainly comes by the first part of that description honestly — it’s directed by David Ayer, the same guy who helmed Training Day. The flick was written by Max Landis — best known as the screenwriter of Chronicle and as the son of legendary director John Landis. There’s some solid talent on board, so this will all come down to execution. We’ll see how it all shakes out when Bright premieres on Netflix next December.