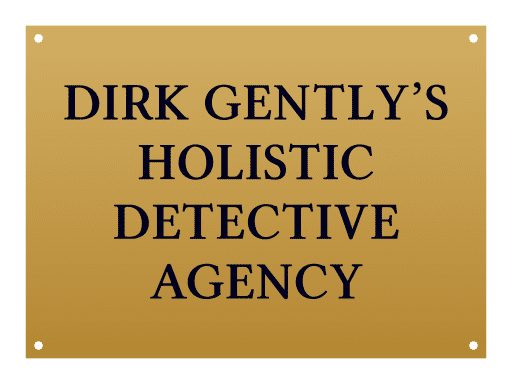 Netflix is partnering with BBC America for a new series based on Douglas Adams’s Dirk Gently books. Deadline reports that Netflix will co-produce Dirk Gently’s Holistic Detective Agency with BBCA, AMC Studios, Ideate Media, and IDW Entertainment. BBC America will premiere the eight-episode comedy/mystery series on October 22. Dirk Gently will then hit Netflix outside the U.S. beginning in December.

Dirk Gently stars Samuel Barnett as the titular gumshoe, a psychic detective who doesn’t actually believe he’s psychic. As a “holistic detective,” he believes in “the fundamental interconnectedness of all things.” That’s the sort of thing that can come in handy for a detective. Assuming you can figure out what it means. Elijah Wood plays his assistant, Todd, and Hannah Marks has the role of Todd’s sister. The show was written by Chronicle screenwriter Max Landis.

Here’s how Deadline describes the show:

Dirk Gently is a comedic thriller that follows the bizarre adventures of eccentric ‘holistic’ detective Dirk Gently and his reluctant assistant Todd, as they wend their way through one big, seemingly insane mystery a season, crossing unlikely paths with a bevy of wild and sometimes dangerous characters, each episode landing them a few random steps closer to uncovering the truth.

Douglas Adams is best known for the Hitchhiker’s Guide to the Galaxy, but he spawned another small franchise with Dirk Gently. The character first appeared in the 1987 novel Dirk Gently’s Holistic Detective Agency, and then returned in 1988’s The Long, Dark Tea-Time of the Soul. Adams left an uncompleted Gently manuscript, The Salmon of Doubt, when he died in 2001. The property has already been adapted several times over the years, including as a BBC Radio 4 audio drama, an IDW comic series, and as a BBC4 TV pilot in 2010.

When the series was first announced last January, BBC America president Sarah Barnett said, “Dirk Gently is a very original series, fresh and unlike anything else. The novels have legions of fans, and with Max Landis’ brilliant and audacious take on this material we are excited to bring Dirk to life for our BBCA super-fans.”