Report: 8.7 Million US Netflix Subscribers Could Leave Service for Disney+ Later This Year

With Disney’s recent announcement of its $6.99-per-month streaming service slated for release in November 2019, there’s been plenty of speculation about how Disney+ could impact the undisputed king of streaming Netflix. Some have boldly dubbed Disney+ a Netflix killer, while others argue the service could actually help Netflix.

Disney CEO Bob Iger boasted the company would be “starting from a position of strength, confidence, and unbridled optimism,” while Netflix CEO Reed Hastings has claimed he’s not worried about Disney+ and doesn’t “anticipate that [Disney+ and other new streaming services] will materially affect [their] growth.”

With so much wild speculation driving the conversation, we partnered with data analysis firm Mindnet Analytics to gain a clearer perspective on how Disney+ may impact Netflix’s domestic business. After surveying current US Netflix subscribers, we found over 14% of the company’s customers are considering ditching their subscription in favor of Disney+ when the new streaming service launches later this year.

We partnered with Mindnet Analytics to conduct an online survey of 602 random current male and female US Netflix subscribers. Our goal was to understand how users felt about the yet-to-be-released Disney streaming service.

We asked a range of questions to find out if customers were interested in what Disney+ is going to be offering and if the new service would influence their decision to continue their Netflix subscription.

About 8.7 million US Netflix subscribers could cancel Netflix when Disney+ is released 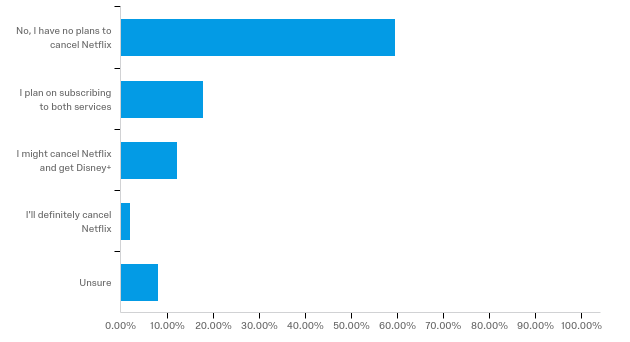 Disney’s announcement of its new streaming service clearly has the attention of Netflix subscribers. With just under 14.5% of subscribers indicating they might leave the service, that represents nearly 9 million customers. That represents $116.9 million a month of potential lost revenue for Netflix. This echoes the anger many subscribers expressed in 2017 when learning Netflix would be losing Disney content.

Of course, the reality is many people who threaten to cancel won’t actually follow through and do so. However, even if it’s just the 2.2% of subscribers who indicate they will definitely cancel that end up doing so, that still represents 1.3 million domestic customers at a time when Netflix’s growth in the US is stalling.

It’s also worth noting about 1 in 5 Netflix users plan on subscribing to both services, viewing the video services as complementary to one another.

37.5% of US Netflix users say they will try Disney+ when it comes out, while 40% have no interest in the service.

Disney has said it expects to grow its streaming service very quickly, projecting between 60 to 90 million subscribers within 5 years. Undoubtedly, a huge audience will be waiting to try the service as soon as it’s released, and while the company hasn’t announced details about a possible free trial offering for the service, we think it’s safe to assume Disney+ will likely have a 7-day free trial, similar to most other streaming services.

Of those current Netflix users surveyed, 37.5% indicated they would try Disney+ when it’s released. That alone represents about an audience of 22.5 million people waiting to try Disney+.

Parents are the likeliest to leave Netflix for Disney+

Those with kids in their household are more than 2x as likely to cancel Netflix than non-parents. 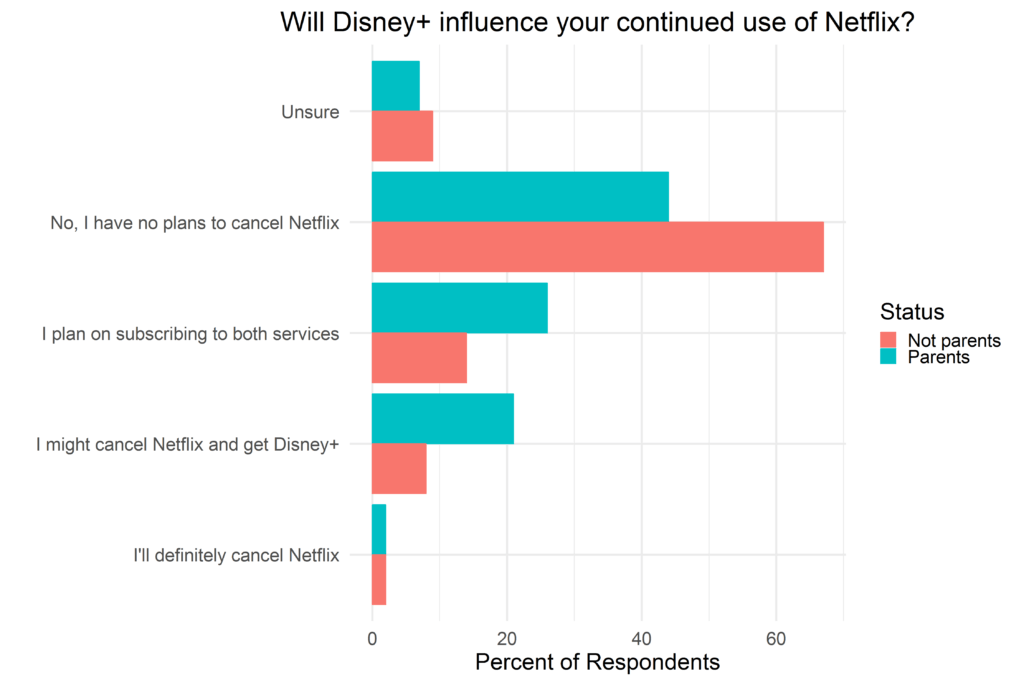 Not surprisingly, Disney+ has piqued the attention of parents. The service is going to carry a huge collection of Disney movies and shows, Pixar movies, Marvel and Star Wars content, and a whole lot more. In other words, just about every kid will be begging their parents to sign up for the service.

Our survey found that 23% of parents with kids 15 and younger in their household may cancel Netflix in favor of Disney+, while only 10% of those without kids will possibly cancel. While Netflix has been steadily adding more kids content to its library, it’s hard to imagine it can match what Disney offers on this front, which could be a source of concern for the streaming giant.

Sample details: Only US participants. Our sample has an appropriate distribution across age categories for streaming video users and representative gender spread of 51% female and 49% male respondents. The fastest 2% of the sample were removed before analysis to ensure data quality (as they may have sped through without paying attention) resulting in the final sample size of N=602. Only mturk workers with a 95% or higher approval rating were permitted to take the survey and only those with at least 50 past tasks completed.