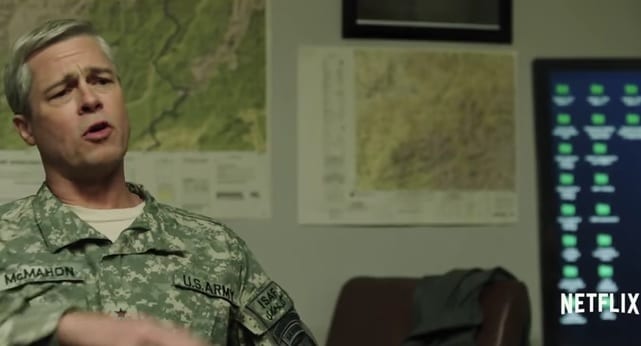 War Machine, a military satire starring Brad Pitt, it set to be released on May 26, 2017. It’s actually based on the best selling book The Operators: The Wild and Terrifying Inside Story of America’s War in Afghanistan, and stars Pitt as a four star general in command of NATO forces in Afghanistan. The book is based off the real life General Stanley McChrystal, who was most well known for his alleged coverup of the Pat Tillman friendly fire incident.

In the trailer, we see Pitt speaking in a familiar southern, scratchy accent that you may recognize from Inglorious Bastards. “Our hope is that you’re the man who will get the job done,” says a man in the trailer. Later, the general is told, “You’re the leader of U.S. forces in Afghanistan and you have spoken to the president once in 70 days. ” In short, he’s simply dealing with a lot of negativity.

Of course, the job is a little more than he bargained for. Add in a journalist’s expose, and he quickly gets overwhelmed. In addition to the realities of war, he’s got to fight the government, plus the media criticizing his every move. His charisma can only get him so far though, and he soon finds himself in a very public fall from grace.

When Netflix won the rights to the film back in 2015, it was a huge get for the streaming giant. The $30 million they paid was their biggest investment at the time, and was the first time they were able to land an A-list star for one of their original films. The streaming giant is continuing to make serious waves in the movie industry, and as they grow, experts say you can expect them to continue to get a-list films.