It’s a monthly tradition among Netflix critics. Every time the streaming service releases its list of content arriving to and leaving the service in the coming month, people rush to the comments with the same two primary complaints:

While Netflix has been transitioning to a streaming service focused on producing its own high quality original programming (but remember, it’s not the overall winner in that category), a big part of what keeps its millions of subscribers is its vast content library, from the entire series of Friends and The Office, to those months when Back to the Future and Animal House are available for consumption at your disposal. That’s the idea behind the streaming service: Consuming content you love and new content you’ve never heard of.

But some fans feel the increased investment in original content is causing both the quality and quantity of its licensed content to decline. It’s a refrain that has been repeated so often that many, myself included, have taken it for the truth. But is it really?

With that in mind, we decided to take a comprehensive look at everything that came into and left Netflix in 2016. To start, we focused on movies as that is the category many have said has suffered the most.

We had two questions we wanted to answer:

To start, we gathered all of the monthly lists Netflix released detailing which content would they would be adding and dropping from their service from January-December 2016. It’s important to point out that we focused only on the US Netflix library for this study. We can’t speak to changes in Netflix’s catalog in other countries.

We would need some kind of consistent rating for each piece of content to determine if what’s leaving is honestly better than what’s arriving.

To begin, we tackled movies, the largest segment on Netflix. We included documentaries and made for TV movies. Pretty much anything that wasn’t a television series. After compiling monthly lists from the year of all movies arriving and leaving, we then looked at each movie’s Internet Movie Database (IMDb) rating. Those user-submitted ratings are on a scale of 10, with 10 being the best. From there, all we had to do was calculate the average scores of the movies Netflix added versus the ones that left the service in 2016.

So, what did we find? Is Netflix’s US movie library really getting smaller and declining significantly in quality?

Here’s what we found.

587 movies came to Netflix in 2016, while 506 left the streaming service. That means Netflix actually gained 81 movies last year — a modest increase, but an increase nonetheless. Of course, today’s Netflix streaming movie library is still much smaller than it was a few years ago, but at least it didn’t get smaller again.

As you can see in the chart above, there were more movies that arrived each month on average than movies leaving. It’s hard to say if the sheer number of movies effects the overall average ranking

But when movies arriving outnumber movies leaving, the discrepancies are much larger: There was a 30-movie gain in July, 20-movie gain in August and a 20-movie gain in December. That tells us that Netflix is trying to keep subscribers by never really shrinking its library.

On average, the movies that left Netflix in 2016 were slightly better than the ones they added. 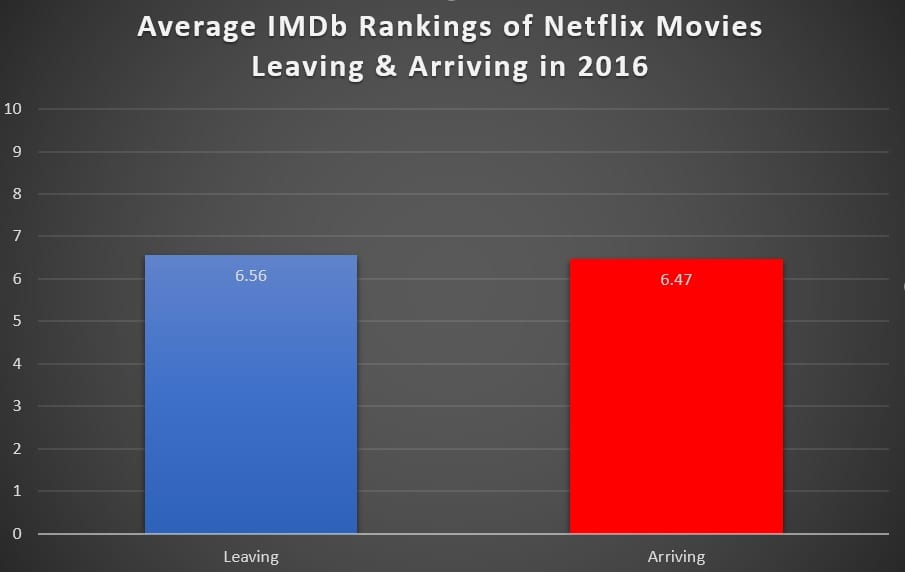 The average IMDb score of movies that left Netflix was 6.56, while the average score of movies added to service was 6.47. So, yes, the movies being added to the streaming library tended to be lower rated than those that left, but the difference is actually pretty small.

The months with the biggest differences in average rating, where the content leaving was ranked higher than what was arriving, were February (1.4) and January (0.6).

When looking at how close the data truly is, February is an anomaly. Part of that reason was the quantity of movies arriving and leaving that month. There were only 19 movies arriving and 12 leaving. You had some good ones that arrived: Cruel Intentions, Armageddon, and Atonement. But you said goodbye to some classics: The Naked Gun, Terminator, Terms of Endearment, and Rain Man.

On the flip side — the biggest differences in average rating where content arriving was higher than content leaving — things were much closer.

Some of the higher ranking movies that arrived in October included Once Upon a Time in the West, Titanic, and Unforgiven. All three Back to the Future flicks left that month (ratings of 8.5, 7.8, and 7.4), but after that, the list pretty much broke down. The Exorcist did score a rating of 8.3.

The highest ranking movies added to Netflix in 2016 were The Shawshank Redemption (9.3 IMDb) and the 2007 documentary Tom Petty and the Heartbreakers: Runnin’ Down a Dream, with an 8.7 rating.

The worst movies added to the service? Jaws: The Revenge (2.9) and Dark Web (2.6) hold that dubious distinction.

What It All Means

Despite the regular complaints, Netflix’s movie library got bigger while maintaining nearly the same level of overall quality in 2016. It’s still not the same service movie buffs loved a few years ago, and it probably never will be again as only one-third of Netflix viewing is of movies and the company focuses more on developing its own binge-worthy TV shows. But at least things don’t appear to be getting markedly worse anymore.