Amazon Prime Video may have more than 4.5x as many movies as Netflix, but quantity isn’t everything.

Netflix’s movie library has often been a source of controversy, with critics complaining the streaming service has lost thousands of movies over the years. And while it’s true Netflix has nearly 3,000 fewer movies in its streaming library than it did in 2010 and Amazon Prime Video’s movie library is more than 4.5x bigger, size isn’t the only thing that matters. It’s quality that arguably matters most, so we decided to see which streaming service’s movie library features the most highly rated films.

In order to analyze the quality of movies on each service, we turned to Rotten Tomatoes current list of Certified Fresh movies. Using a combination of data from Rotten Tomatoes, streaming service providers, and third-party sites ReelGood and JustWatch, we analyzed the movie libraries of Netflix, Amazon Prime, Hulu, and HBO NOW/HBO GO to how the streaming services’ movie libraries compare.

When it comes to total number of movies, none of the other major streaming services come close to Amazon Prime. With a total of 17,461 films, Prime’s movie library is more than 4.5x larger than its next closest competitor Netflix, which has 3,839 flicks to choose from.

While many contend that quality is the most important attribute, that’s not to say size doesn’t matter at all. In order to keep subscribers happy, streaming services do need to have a large, diverse library that’s regularly updated so everyone has plenty of options to choose from.

And here, Amazon undeniably is doing a great job, but of course, this doesn’t tell the full story.

Despite concern that Netflix is losing too many movies, one thing is clear — when it comes to the quality of its movie library, it’s still comfortably in the lead. In fact, Netflix has more Certified Fresh movies (596) than Prime, Hulu, and HBO NOW combined. 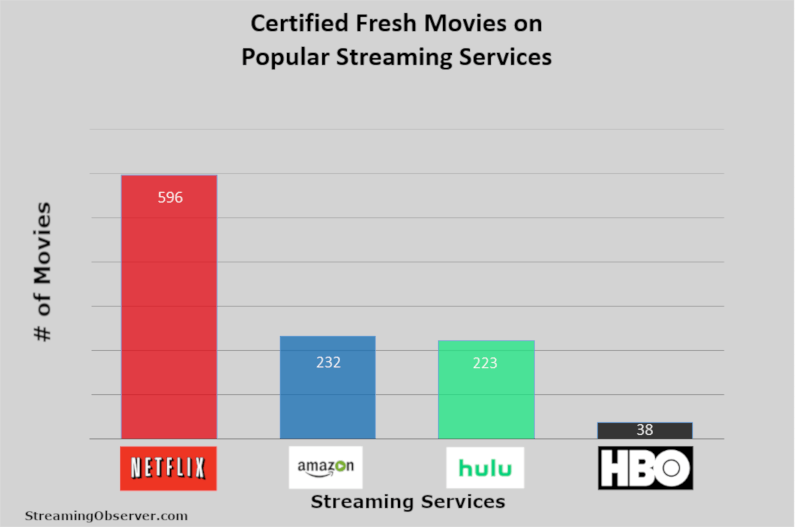 In fact, when you look at it in terms of what percent of each movie library is made up of Certified Fresh, not only does Netflix completely dominate, but Amazon Prime falls in dead last.
At the end of the day, Netflix remains the best streaming service overall…for the time being. Of course, as new streaming services from Disney, Apple, and others enter the market and Netflix loses more of its licensed content, it remains to be seen how long they can hold onto the crown.