Anyone who’s scrolled through their streaming queue recently knows that Netflix is pumping out an insane amount of original content — more every year. Having built their empire with hit shows like House of Cards, Orange Is the New Black, and the Marvel series, Netflix is taking risks and spending money. Lots of money — around $5 billion for original content and licensing of existing content. But which types of programming does Netflix think are bringing in the most bang for their buck? Deutsche Bank might have some answers.

As reported by Business Insider, on Sunday Deutsche Bank analysts Bryan Kraft and Clay Griffin revealed to investors their estimates of how Netflix’s original content has broken down so far. Oh look, it’s a handy graph, courtesy of Deutsche Bank! 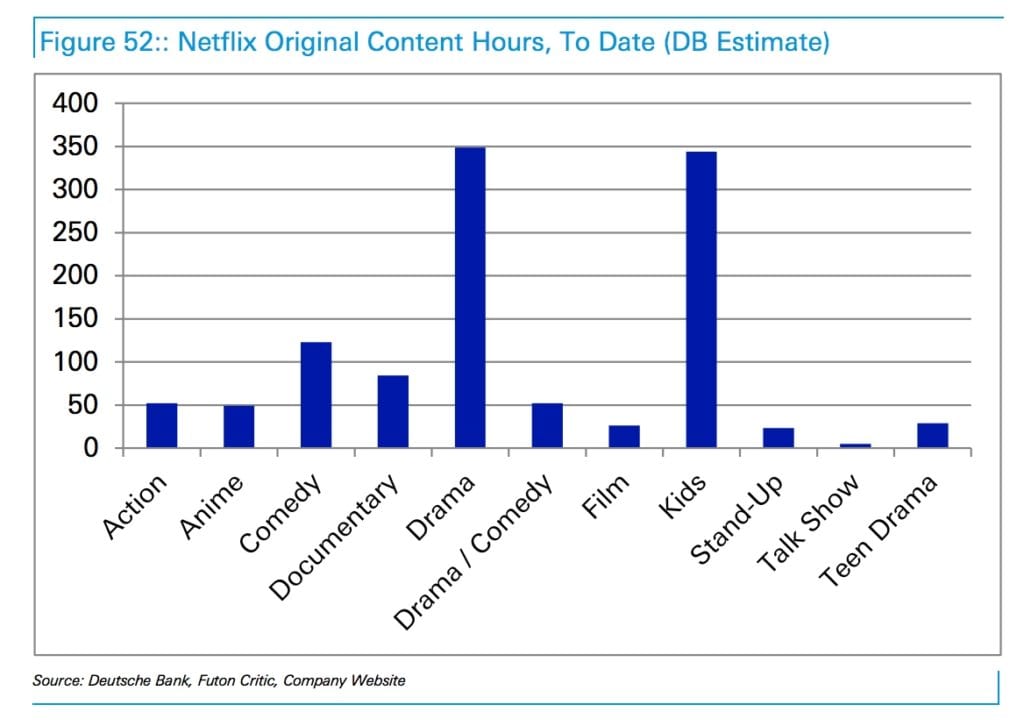 There’s no surprise that drama series are leading the pack. Since the graph is measuring content hours, dramas automatically have an advantage over comedies simply by virtue of typically having longer episode lengths. The dramas also often tend to demand higher budgets than the comedies. Shows like House of Cards, Sense8, and The Get Down don’t come cheap — the latter reportedly cost Netflix $120 million. Netflix comedies such as Orange Is the New Black, Unbreakable Kimmy Schmidt, and Master of None can be made, comparatively, on the cheap.

One thing that would be interesting is to know how exactly each of those categories were narrowed down. The Marvel/Netflix shows, for instance, could definitely fit in the “Action” column…but you could often make just as strong for the “Drama” category, since they’re effectively dramas interspersed with action.

Readers who don’t have kids may be shocked to see how much Netflix has been focusing on children’s entertainment, but it’s no surprise to parents who regularly peruse the service. Netflix’s Kids section is well stocked with originals these days, including original projects and shows and films based on pre-existing IPs such as Madagascar, Mr. Peabody & Sherman, and Voltron. Netflix is launching nearly three dozen children’s shows this year.

Netflix continues to diversify its original content and take risks, which is how you get outside-the-box hits like Stranger Things. Given how deep their pockets are, that trend is likely to continue.