27% of Netflix Subscribers Say They Could Cancel Service After Latest Price Increase; Many Interested in Cheaper, Ad-Supported Version

On Tuesday, Netflix announced it would be raising prices for all 58 million US subscribers by anywhere from 13 to 18 percent, depending on which plan you have. The price increases are expected to help the company produce even more original content while also going toward paying off debt incurred fending off new entrants to the streaming industry, like Disney and Apple. And while news of the rate hikes made investors happy and caused the company’s stock to rise, we couldn’t help but wonder what actual customers thought about the price increases. After all, these are the biggest price increases the company has ever rolled out in the 12 years since launching the streaming service.

With that in mind, we surveyed current US Netflix subscribers to gauge their reaction to the latest round of price increases from the streaming service. Here’s what we found.

We partnered with Mindnet Analytics to conduct an online survey of 607 random current male and female US Netflix subscribers. Our goal was to understand how users felt about the recently announced price increases.

We asked a range of questions to find out if customers were aware of the price increases, if they even knew how much they were currently paying for the service, how they planned to react to the increase, and if they had any interest in a discounted ad-supported version of Netflix.

Around 1 in 4 subscribers claim they could cancel Netflix because of the price increase.

24% of respondents said they “might cancel” while 3% were certain they would “definitely cancel”.

Not surprisingly, Netflix’s rate increase has some customers thinking twice about whether or not they want to keep paying for the service. Despite only being a $1-$2 increase, a total of 27% say they are either considering canceling or will definitely cancel their service. Another 10% said they planned on downgrading to one of Netflix’s less expensive plans to offset the new rates.

This might sound like bad news for Netflix, but we don’t think the sky is falling. In the past when Netflix has raised prices and subscribers have threatened to cancel in large numbers, analysts predicted only a very small percentage, roughly 3%-4%, of subscribers would actually do so. In that case, the price increase would still prove to be quite profitable overall for Netflix.

Most Netflix subscribers would be interested in a discounted, ad-supported version of the streaming service

Only 35% of respondents said they wouldn’t tolerate commercials on Netflix, even if the service was free. 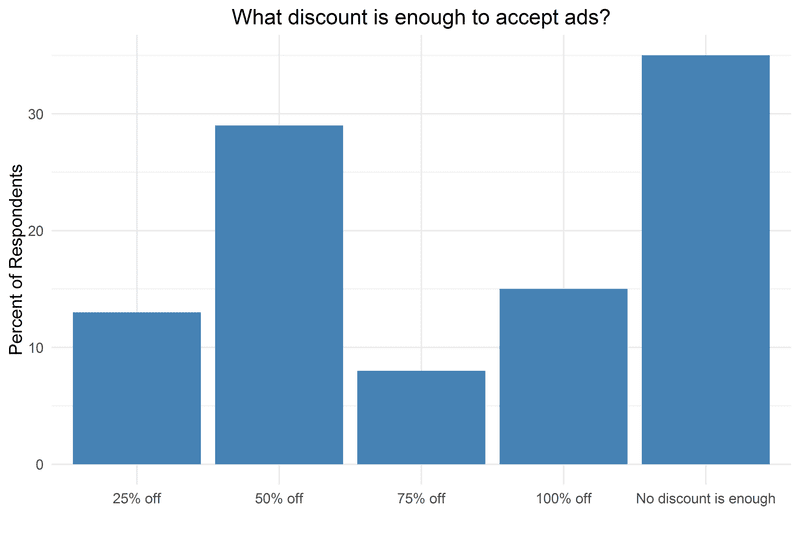 In the past, many Netflix users were adamant they would never tolerate ads on the streaming service. However, the latest round of price increases has most subscribers reconsidering. 29% said they would need 50% off to tolerate a version of Netflix with commercial interruptions, 13% would need 25% off their current bill, and 8% would need a 75% discount. 15% of respondents said the service would have to be totally free in order to deal with ads, while a little over 1 out of 3 subscribers said no discount would be enough.

A couple of other interesting findings from the survey include:

Sample details: Only US participants. Our sample has an appropriate distribution across age categories for streaming video users and representative gender spread of 51% female and 49% male respondents. The fastest 4% of the sample were removed before analysis to ensure data quality (as they may have sped through without paying attention) resulting in the final sample size of N=607. Only mturk workers with a 95% or higher approval rating were permitted to take the survey and only those with at least 50 past tasks completed.