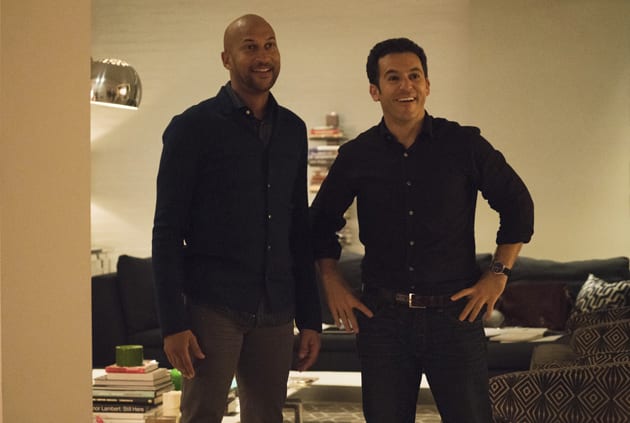 Netflix has released two first-look images at its upcoming original comedy series Friends from College. The series was announced last year and immediately drew attention for the many big names attached to it. Friends from College stars Keegan-Michael Key, half of the duo behind comedy sensation Key & Peele, along with longtime television star Fred Savage. How I Met Your Mother alum Cobie Smulders, The Mindy Project‘s Jae Suh Park, and Annie Parisse from Vinyl round out the star-studded cast.

From what Netflix and the cast have revealed so far, Friends from College sounds like the typical run-of-the-mill ensemble sitcom/rom-com. The plot revolves around a group of former Harvard classmates as they go about their adult lives with varying degrees of professional and interpersonal success. The series explores the group’s convoluted web of relationships, both platonic and romantic, alongside their longing to return to a simpler time when all they had to worry about was their upcoming final exams.

Friends from College is created, written, and executive produced by husband-and-wife team Nick Stoller and Francesca Delbanco. Stoller is best-known for directing the 2014 comedy Neighbors starring Seth Rogen and Zac Efron. Both he and spouse Delbanco attended Harvard similar to the characters in Friends from College, so snooty Harvard in-jokes are to be expected.

The series might not be breaking any new creative ground, but the cast alone is enough to draw in viewers. Netflix has been diversifying its original content over the last few years, rounding out its heavier dramas and true crime documentaries with a hefty dose of comedies. Whether or not the worn out formula of large cast rom-com works out for Netflix has yet to be seen, but if the success of Easy is a gauge, Friends from College could be a surprise hit.

A release date has yet to be announced, but Netflix has said Friends from College will debut this year.