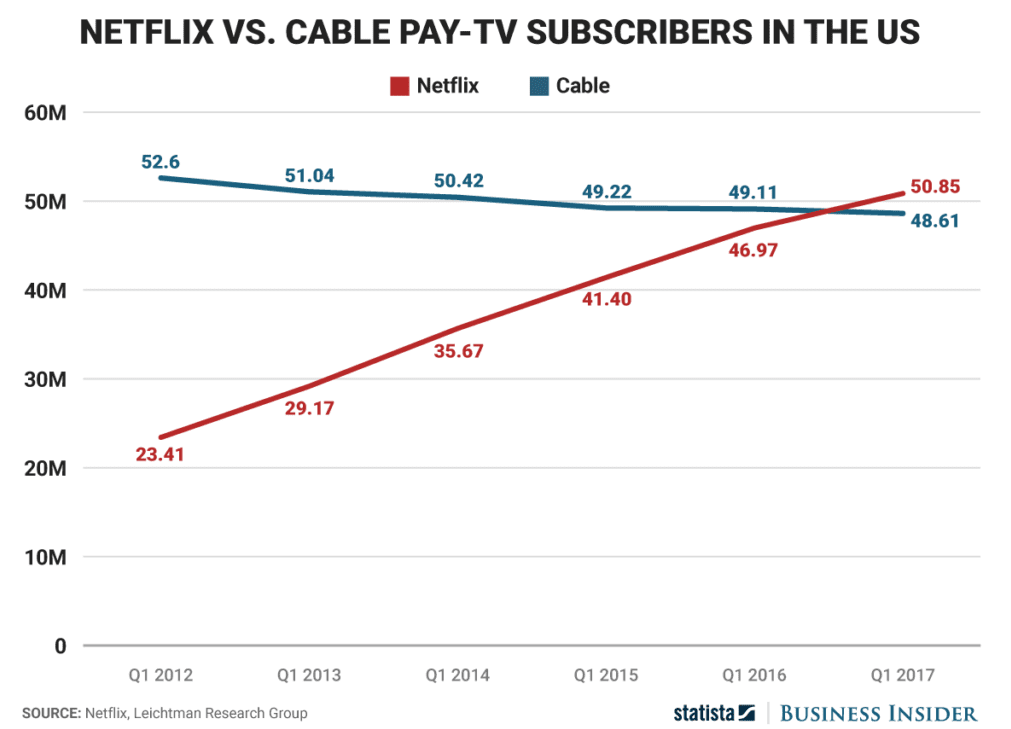 It’s been coming for some time, but recent numbers have made it official: Netflix is now more popular than cable in the U.S. That announcement is based on data gathered by the Leichtman Research Group which charted media use in American households during the first quarter of 2017. According to Leichtman’s findings, cable suffered significant losses throughout Q1 2017, with the six leading cable companies losing a combined 115,000 subscribers so far this year.

Bruce Leichtman, the president, principal analyst, and namesake of Leichtman Research Group, says that the loss of subscribers is complicated and doesn’t necessarily mean more people are giving up cable, just that fewer people are signing up:

The pay-TV market lost about 410,000 subscribers in the first quarter of 2017. This marked the first time that the industry has ever had net subscriber losses in the first quarter of a year. The decline in subscribers should not be interpreted as solely driven by a sudden increase in consumers disconnecting services. The net losses are also a function of a decrease in new connects, partially due to some providers less aggressively pursuing lower value customers than in the past.

Satellite services, meanwhile, also took a hit. Between DIRECTV and DISH, 318,000 subscriptions were lost in Q1 2017. Netflix, meanwhile, is signing up new customers left and right.

It makes sense why so many consumers are cutting the cable and opting for streaming video-on-demand services. Streaming offers a level of convenience that cable never did, and most streaming service subscriptions cost far less than cable. A basic Netflix membership costs just one tenth of what the average monthly cable subscription now costs. Couple that with the fact that some of the industry’s best talent is moving to streaming, and it’s clear that streaming will be the future of television and film. I guess the future is now.