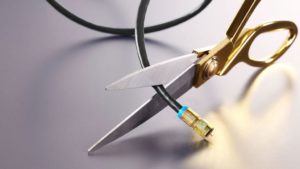 More than 1 million pay TV customers dropped their subscriptions in 2015, largely in part due to cord cutting.

MONTEREY, Cali. — The number of cable TV subscribers continues to drop, according to the latest data from SNL Kagan.

The California-based research group released 2015 fourth quarter results last month that showed a resurgence in cable subscriptions, which is likely internet-only subscriptions, but a downward trajectory in the multichannel segment.

With the fourth quarter results in place, more than 1 million video customers dropped their subscription for the year, according to the data. This marks the third annual decline for the pay TV industry.

Year-end residential subscriptions are at about 96.7 million today.

As expected, cord-cutting contributed to this trajectory, as the idea of dumping pay TV for cheaper streaming options continues to disrupt the traditional subscription model.

Important to note: The data and survey doesn’t include Dish Network’s streaming service SlingTV as part of its 1 million subscriber loss number. The same research group estimated Dish added 538,000 Sling TV subs that year, according to the Motley Fool, meaning there’s also a shift to a lower-cost option, known as cord-shaving.

All that being said, the cable industry isn’t ready to write its obit.

“When you look past all of the glib headlines about cord cutting and actually check out what is happening with higher quality cable stocks, it is clear that we are dealing with a very different story,” said Mad Money host Jim Cramer. “Reports of cable’s death have been greatly exaggerated.”