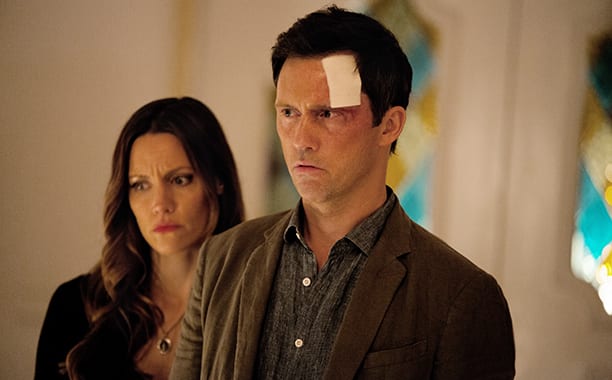 Hulu has had some solid word-of-mouth hits this year, including the Stephen King adaptation 11.22.63 and the drama The Path, starring Breaking Bad‘s Aaron Paul. The streaming network also continues to find success on the comedy front with shows like Casual and Difficult People. Their upcoming series Shut Eye finds a middle ground between the serious and the silly, serving up a comedy/drama about a failed magician who’s trying to make ends meet as a “psychic.” Unfortunately, it looks like he failed to predict just how much trouble his new line of work work bring him. Check out the new teaser for Shut Eye below.

In the Hulu Original, Shut Eye, Charlie Haverford (Jeffrey Donovan) is a scammer with a small chain of fortune-telling storefronts and contracts building tricks for a family that controls the business in the greater chunk of Los Angeles. A blow to the head from a client’s angry boyfriend intersects with a hypnosis session while auditioning a new ‘clairvoyant,’ and suddenly, a man whose entire life has been based on fraud begins to see and feel some very real and fundamental truths. Charlie’s wife Linda (KaDee Strickland) is sick and tired of their mediocre life and wants to break away from Fonso (Angus Sampson), the single father who runs the Marks family’s psychic empire, and controls the Haverford’s future. Rossellini co-stars as Rita, the cunning, seductive, and sadistic matriarch of the Marks clan.

Shut Eye finds Haverford at odds with a Romani crime family who rake in the dough from so-called psychics throughout Los Angeles. The trailer looks fun, and the Romani angle is reminiscent of FX’s underrated crime dramedy The Riches — and that’s a good thing. It’s the sort of story that’s been told many times before, but the chance to explore a very specific subculture that most viewers know little about should add some new twists. Donovan was also a charming and engaging lead in Burn Notice, so it’s good to see him back on the airwaves again.