Study: US and UK Netflix Movie Libraries Are by Far the Worst Among Top Netflix Markets

At the end of last month, we ran an analysis on Netflix’s movie library in the US, showing that it only had about 12% of the movies on IMDb’s Top 250 list. We received a lot of feedback on the story, much of which included comments like “my country has even less.”

So we got to thinking if the US Netflix movie library only has about 12% of IMDb’s Top 250, how does that stack up with the rest of the world? Obviously, licensing varies by country, so it stands to reason that the findings could have been very different elsewhere.

With that in mind, we chose 9 other countries where Netflix is prominent and ran the same study for each of them using a search tool, cross-referencing libraries with IMDb’s Top 250 list. Here’s what it looks like when you compare across countries. 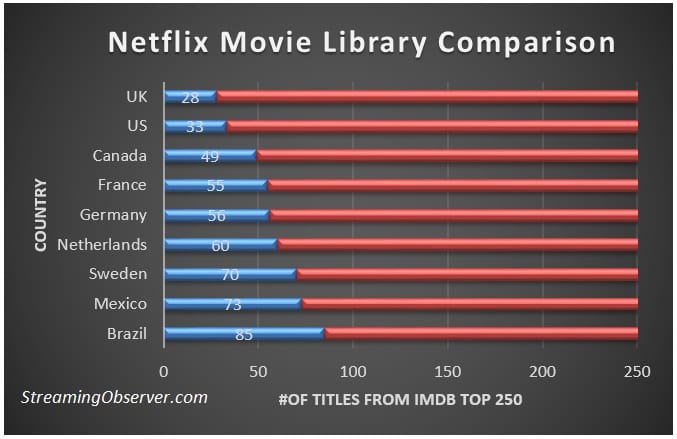 It’s no wonder Netflix users were so angry about the big VPN block. Netflix is much more attractive if you can access all that awesome movie content from Brazil from anywhere else in the world. Of course, the VPN block isn’t perfect, and many VPN blockers have said they can skirt around it.

Want to see exactly which movies are available in the countries analyzed in this study? Check out the [giant] chart below.

Update: An earlier version of the study combined the libraries of Netherlands and Netherlands Antilles. The data has been reconfigured to extrapolate just Netherlands data and correct associated errors.