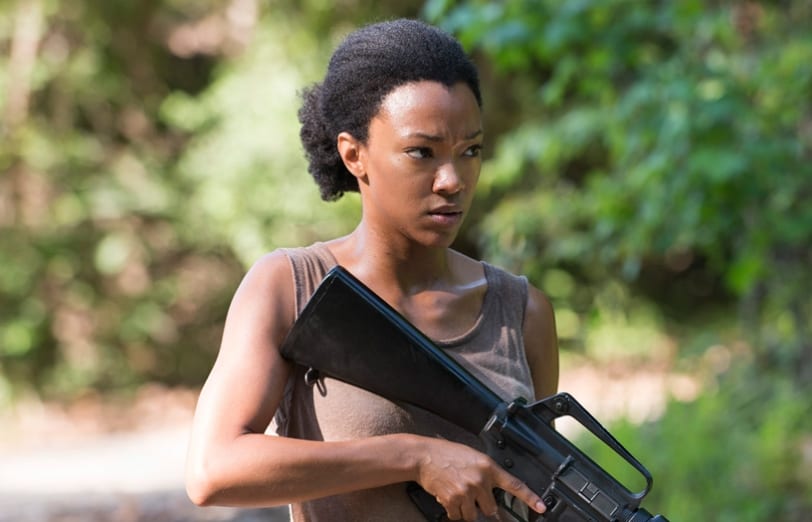 The newly cast lead of the upcoming CBS All Access series Star Trek: Discovery knows a thing or two about surviving hardships and exploring unfriendly territory. And while she might not have faced any Klingon battle cruisers, she has stared down the business end of Negan’s bat in The Walking Dead. Discovery has found its commander the form of The Walking Dead‘s Sonequa Martin-Green.

Entertainment Weekly exclusively broke the news, hot on the heels of a ton of casting announcements for the show that have come in the past couple of weeks. EW reports that Martin-Green will take on the role of the lieutenant commander of the Discovery — not its captain, which is a distinction worth noting. EW doesn’t name the character, but some reports suggest her name will be “Rainsford,” but she’ll also be referred to as “Number One,” the same shorthand used between Picard and Riker in The Next Generation. It’s also a direct tip of the hat to Majel Barrett’s character in the original Trek pilot, “The Cage.”

She joins a Discovery cast that’s been filling up rapidly in recent weeks. Michelle Yeoh will be playing the captain of another Starfleet vessel, the Shenzhou. Hellboy‘s Doug Jones is playing the Discovery‘s science officer, Saru, alongside Anthony Rapp as a Discovery scientist with a specialty in space fungus (we kid you not).

Earlier this week, Discovery lined up a bevy of Klingons as well. Shazad Latif is playing Kol, a Klingon commanding officer and follower of T’Kuvma (Chris Obi), whom Deadline reports is “seeking to unite the Klingon houses.” Finally, Mary Chieffo is playing L’Rell, “Battle Deck Commander of the Klingon ship.” So, whatever other races the crew of Discovery encounters out there in the final frontier, there’s definitely going to be no shortage of Klingons.

Star Trek: Discovery is being shepherded by Gretchen J. Berg and Aaron Harberts, after the departure of original showrunner Bryan Fuller earlier this year. Trek movie veteran Alex Kurtzman also serves as executive producer. Discovery is set to debut on CBS in May 2017, then move to CBS All Access for the rest of its debut season.

EW also mentions that Martin-Green will still be maintaining her role as Sasha Williams on The Walking Dead.