AT&T TV launch and everything we know so far

AT&T TV is the newest streaming service for this well-known telecom giant. Even though it has two similar products, this new option may offer a significantly different experience. AT&T TV launched in a handful of test markets in August 2019, and there are plans of expanding availability across the US. It interfaces with the AT&T TV app, which means you can watch it on mobile devices, smart TVs and TV platforms. The service comes packed with 55,000 on-demand titles and a cloud DVR capable of storing up to 500 hours of shows and movies.

Even though you don’t need to use a DVR box to watch it, you can have one installed that comes with a voice-activated remote control and Google Assistant. Users can speak into the remote and operate not just AT&T TV but smart home devices as well.

AT&T TV service at a glance

Not only does AT&T TV break new ground with its smart home device integration, but the service also provides several outstanding features. The viewing experience alone comes with some impressive options at a reasonable price.

Users who want to save a few bucks may enjoy the service’s bundle plan, which allows you to combine AT&T TV and AT&T internet service. The plan requires a 24-month commitment to AT&T TV and a 12-month internet package. Subscribers can save $10/mo. on  AT&T TV and another $10/mo. on their internet plan with this bundle. That’s a total of $20/mo., or $240/year in savings.

To ensure customers have an optimal viewing experience, the provider recommends internet speeds of 8 Mbps or faster. All bundled plans feature speeds starting at 25 Mbps.

With 5,000+ apps accessible such as Pandora and Netflix, there are virtually no barriers between you and the entertainment you value most. This includes choices that provide access to ultra-high quality content. If you have a 4K-enabled TV, you can enjoy selections from services such as Netflix in UHD.

AT&T TV offers subscribers plenty of options. Customers have access to top TV networks, including some heavy-hitters like AMC, CNN, TBS and TNT. In addition, viewers can enjoy traditional broadcast networks like ABC, CBS and NBC. Sports-lovers can sit back and catch the game on ESPN and ESPN2, and music fans can groove out to BET, MTV and VH1.

Watching on more than one screen at a time won’t be a problem because the service allows viewers to stream up to three different shows simultaneously. The multi-screen feature permits one or two people to tune in on mobile devices while others watch on the TV.

Even if the three simultaneous streams aren’t enough, you no longer have to worry about competing to watch your favorite shows and movies. You can simply record them using the cloud DVR and check them out later. With enough space to hold 500 hours of video content, you’ll have sufficient room to record new programs without having to worry about clearing additional space on your DVR. The service even lets you record multiple programs at once. The cloud DVR only holds recordings for 90 days.

There’s no need to make an appointment for someone to come and set up your AT&T TV box. With just a few steps, it can be up and running in no time. Here’s how it’s done:

The biggest drawback of AT&T TV’s streaming service is its limited availability. The only people who currently have access to the service are residents of California, Florida, Kansas, Minneapolis, Missouri, New York, Texas and Washington state. It’s unclear when AT&T is going to expand its list of service areas. Although it recently introduced the service to four new markets, there are no definitive plans for expansion.

The 90-day limit on cloud DVR storage is another potential issue. Other providers, like YouTube TV, don’t set time limits on how long you can keep recordings. The 90-day cut-off might not be a big deal if you’re not interested in keeping recordings long term. But if you want to hold on to your faves to watch year-after-year, you may want to look into services with more flexible DVR options.

If you haven’t yet given AT&T TV a shot, you can check online to see if it’s available in your area. If not, you can access some of the same programming with other options, including AT&T Watch TV, which has a seven-day free trial.

AT&T TV is a useful option for people who need a lot of space to save their favorite content. With 500 hours of DVR storage, you’ll have more than enough room to record the shows you just can’t miss.

The box and interface put a dynamic smart-home device controller in your hands. Thanks to the voice control feature, you can control any smart device, from microwaves to light fixtures, with a simple voice command—without missing a millisecond of a movie or TV show.

Adam enrolled at Northeastern University in Boston, Massachusetts as a business major with a concentration in marketing, but his love for writing inspired him to switch to English. He was captain of the championship-winning track and field team and a scholarship triple jumper and high jumper. He currently writes for ClearVoice, The Daily Hodl (DailyHodl.com), Bitcoin Market Journal, HubShout, the CBS company, Metro, and a variety of private clients across the planet. 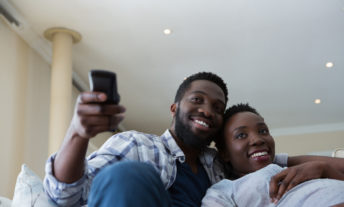