How to Watch Blood & Treasure Online without Cable

CBS All Access is a standalone streaming service that offers all CBS content, all the time. Over 90% of the country will get the CBS live stream and an on-demand library is included. Get 7 days free.

Hulu with Live TV offers something for everyone with over 60 live channels and the addition of Hulu on-demand. Local channels are available in most areas and that includes CBS. Get 7 days free.

fuboTV is amazing when it comes to sports streaming, but they also offer loads of general entertainment channels. Over 80 channels are included and CBS is available live in many areas. Get 7 days free.

What do you get when an antiquities expert teams up with an art thief to catch a relentless terrorist that uses stolen treasure to fund his terrorist attacks? You get the Blood & Treasure live stream. Blood & Treasure offers plenty of action and adventure. The show features James Callis, Alicia Coppola, and Katia Winter, to name a few. Keep reading to learn how to watch Blood & Treasure online!

Stream CBS for $6 per month

CBS All Access is a standalone streaming service that offers everything you could want from CBS. In addition to the CBS live stream, which is available in over 90% of the country, CBS All Access includes a huge on-demand library and access to CBS All Access original content. You even get a small movie library. The on-demand library features over 10,000 episodes of CBS shows. Basically, if it airs on CBS, it ends up in the on-demand library. This ensures that you have access to your favorite shows whether you watch them live or not. As it can be difficult to watch local channels without cable, this is one of the easiest options if you want to watch Blood & Treasure online.

Over 90% of the Country Gets the CBS Live Stream 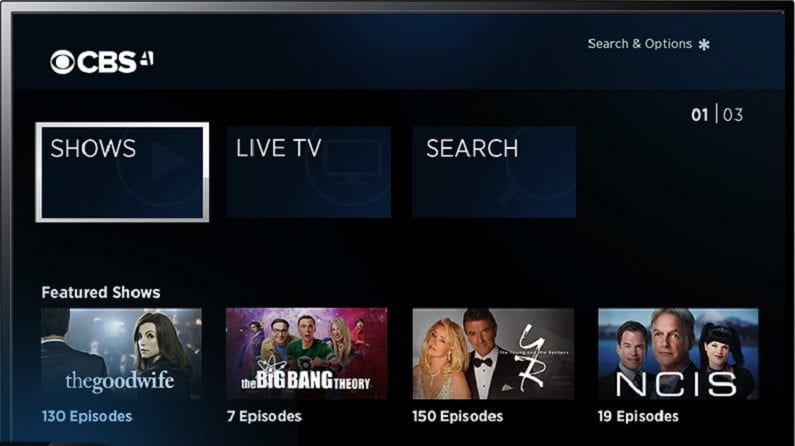 CBS All Access is available for $6 per month. This makes it a great choice if you’re looking for CBS, but it’s not available in your other streaming packages. You will be able to watch Blood & Treasure streaming on Chromecast, gaming consoles, iOS/Android, Roku, Apple TV, and other devices. You can learn more in our CBS All Access review. Don’t forget to sign up for your trial because it’s one of the few ways to watch Blood & Treasure online free!

Hulu Live offers local channels like CBS to more markets than any other streaming service. That means if you want CBS in your package, this is going to be one of the best bets you have. Things get started with over 60 channels for $45 per month. This package also includes the Hulu on-demand service, which means you get a nearly endless amount of on-demand content including Hulu Originals. Beyond local channels you’ll have ESPN, TNT, FX, Freeform, USA, Food Network, Syfy, and many other channels. You can even use some TV Everywhere apps with your account.

If you’re worried about missing something, you can record it to your cloud-based DVR. The DVR comes included with your account, offering 50-hours of space. More space is available through an upgrade. You can watch Blood & Treasure online on gaming consoles, smart TVs, computers, Apple TV, Amazon Fire TV devices, Chromecast, Roku, mobile devices, and more. If you want to learn more you can check out our Hulu with Live TV review.

Over 80 live channels and an on-demand library

fuboTV is considered a sports streaming service because you get over 30 sports channels in the main package. While that will definitely appeal to any sports fan, fuboTV actually offers over 80 channels in that package, so there is plenty for everyone to watch. Where local channels are concerned, CBS may be available in your area. If not, you’ll be able to stream Blood & Treasure full episodes on-demand. In fact, thanks to 3-Day Replay, pretty much everything that airs on fuboTV will be available for up to three days (usually longer) after it airs live. Packages are $55 a month, but the first month is available for $45.

Like most services you’ll also have access to TV Everywhere apps. If you want more channels, there are several add-ons available. A cloud-DVR is included and while storage is limited, an upgrade is available. You can watch Blood & Treasure streaming on many devices. Roku, Chromecast, Apple TV, Fire TV, mobile devices, and more are all compatible. You can learn more in our fuboTV review.

PlayStation Vue gives you the chance to pick from four main packages. All of them include CBS if you’re in an available viewing area. The main package is $45 per month and includes around 50 channels. If you’re not in an area that includes the CBS live stream, you’ll be able to stream Blood & Treasure on-demand. The on-demand library features content from a wide variety of networks. You can even use TV Everywhere apps with PS Vue. Depending on your package you could also have ESPN, AMC, USA, TLC, Freeform, Syfy, TNT, FX, and many other channels.

More channels are available, if you’re looking for something specific like HBO. All packages also come with a cloud-DVR. Storage allows you to save a lot of shows at once, but each show is only held for 28-days. You won’t need a PlayStation to watch Blood & Treasure online with PS Vue. PS3 and PS4 are options, but you can also use Roku, Apple TV, computers, Amazon Fire TV, mobile devices, and more. If you want to find out if PS Vue is the right service for you, give the free 5-day trial a try!

CBS is included in all available packages

DIRECTV NOW offers CBS in every package they offer. It’s available live in many homes, but it depends on where you live if it’s available in your area or not. Multiple package options are available with plans starting at $50 per month and going up from there. This package includes over 40 channels including local channels, if they are available, TNT, USA, ESPN, HBO, and several other popular networks. An on-demand library is included in every package. You’ll also be able to check out more content using TV Everywhere apps.

Upgrades are Available in Many Areas

There are no contracts to sign with DIRECTV NOW and you won’t need a cable box, as this service is an online streaming service. You will be able to watch Blood & Treasure streaming on Chromecast, Amazon Fire, Roku, Apple TV, computers, and mobile devices. The cloud-DVR features a limited amount of space. If you’re still on the fence, make sure to look over our DIRECTV NOW review for more information. Of course, the best way to learn more is to sign up for a free 7-day trial!

YouTube TV has a Way to Watch Blood & Treasure Online

Local coverage is available in most areas

YouTube TV comes with over 70 popular cable and local channels. Like Hulu Live, YouTube TV attempts to bring local channels into as many homes as possible. This means there could be a good chance that you’ll end up with CBS. Of course, if the live stream isn’t available, you can still watch content in the on-demand library or using TV Everywhere apps. In addition to local channels, this package includes Food Network, USA, BET, AMC, ESPN, Freeform, FX, and many other channels.

One of the most popular ways to watch Blood & Treasure online with YouTube TV is through mobile apps. YouTube TV’s mobile apps are award-winning and make streaming on-the-go so easy. You can also watch Blood & Treasure online with Apple TV, computers, Roku, Chromecast, and other devices. A cloud-DVR is available with unlimited space, so you won’t have to worry about running out. All recordings are held for nine months, so you can even binge full seasons of your favorite shows if you want. Our YouTube TV review can tell you more.

Watch Blood & Treasure Online without Cable on a Digital Antenna

The CBS live stream is offered in most areas for free with a basic digital antenna. As a cord cutter this is a cheap and easy way to get local channels. Not only does it allow you to get anything available in your area, it also allows you to pick a streaming package based on available cable networks, as opposed to local ones. Best of all, antennas are usually pretty cheap and once you’re set up, you won’t have to pay to watch any of the channels in your area.

Some good options include:

How Else Can You Watch Blood & Treasure Streaming Without Cable?

Is Blood & Treasure on Hulu?

You won’t be able to watch Blood & Treasure streaming on Hulu, at this time. Our Hulu review has more details.

Is Blood & Treasure on Amazon Prime?

Amazon Prime is a great service, but it could be sometime before you can stream Blood & Treasure through Prime on-demand. If it is included at all, the season would need to be over before it could be added. You can read our Amazon Prime review, here.

Is Blood & Treasure on Netflix?

There is currently no way to watch Blood & Treasure online on Netflix. Our Netflix review can tell you more.

You will be able to watch Blood & Treasure online in many ways. If you have any questions, leave them in the comments!