fuboTV is one of the top options if you’re looking for a sports streaming option without cable. Start with 80+ channels including over 30 sports channels in each package. Get 7 days free.

Hulu with Live TV is the live TV extension to the popular Hulu on-demand service. The service merges Hulu on-demand with 60+ live local and cable networks. Get 7 days free.

Sports streaming is usually at its cheapest with Sling TV. This service gives you . more than 30 channels for just $25 and from there you can add many low-cost bundles to up your channel count. Get 7 days free.

The Mid-American Conference teams will gather soon for the MAC Tournament. The winner will receive a guaranteed bid to the NCAA Tournament, so a lot is on the line when it comes to this tournament. Millions of fans are looking for a way to watch MAC Tournament online, and if you’re reading this, you’ve found the right place!

Taking a look at the MAC Tournament schedule, you will see that the tournament’s games are set to be hosted on a number of networks. More specifically, games will be available from March 14-16 on ESPN+, CBS Sports Network, and FOX College Sports. Meanwhile the Championship game will air on ESPN2. All of these networks are available without a cable subscription. The best ways to get the MAC Tournament live stream are listed below for your use.

fuboTV offers two of the three channels that you’ll need to watch the second half of the MAC Tournament live stream. While the first half airs on ESPN+, a standalone streaming service, the other half airs on CBS Sports Network and FOX College Sports. The Championship game is on ESPN2, though fuboTV does not offer ESPN, so that’s missing. Each package offers 80+ channels and over 30 channels are sports channels. CBS Sports Network is included, and you can add FOX College Sports for an additional fee. Plans start at $45 per month

Introductory Pricing is Available for the First Month

No contracts are included with fuboTV, so you can cancel at any time. The first month of service you get a slight discount and will only pay $40. Packages also include an on-demand library, cloud-DVR, and access to many TV Everywhere apps. You can watch MAC Tournament online with fuboTV using Chromecast, Apple TV, Amazon Fire TV, Roku, mobile devices, and more. Our fuboTV review has the details.

Click here to try a FREE 7-day trial of fuboTV!

$45 a month gets you 60+ channels including many local channels

Hulu with Live TV is similar to fuboTV in the way that in terms of MAC Tournament streaming you’ll have two of the three necessary channels. Here you’ll get 60+ channels for $45. Your Hulu Live channel lineup will include both ESPN2 and CBS Sports Network. You’ll also have ESPN, FS1, FOX Sports regional channels, NBCSN, local channels, and much more. There are also channels like Showtime that you can add to your package for a small fee. With Hulu Live, you also get the Hulu on-demand service at no additional charge.

Hulu’s On-Demand Service is Included in Your Package

Hulu Live also allows you to use many TV Everywhere apps with your account. If you want to record live TV, you’ll find a cloud-based DVR offering 50-hours of space in your account. This can be upgraded to 200-hours if you need added space. Streaming is possible on two devices at the same time but can also be upgraded to stream on as many devices as you want. You will be able to watch MAC Tournament online with gaming consoles, Apple TV, Roku, Chromecast, Fire TV, mobile devices, and more.

Get the MAC Tournament Live Stream with Sling TV

ESPN2 is available with Sling Orange for $25/month

Sling TV is a good choice if you only want to stream the MAC Tournament live stream during the Championship game. You see, Sling TV only offers ESPN2 and not FOX College Sports or CBS Sports Network. That said if you just want the Championship game, Sling TV will allow you to watch it for free! This online streaming service provides 30+ channels for only $25 per month (with no contract), and lets you stream all of them live, without cable TV. Instead of using a cable box, you use a streaming device, such as a Roku or Apple TV, that you hook up to your big-screen TV to watch.

Most Key Channels for the MAC Tournament Live Stream are Missing

For MAC Tournament live streaming, the key channel included in Sling TV’s basic package is ESPN2. Tons of other great channels are also included, such as ESPN, AMC, TNT, HGTV, Comedy Central and much more. Check out the Sling TV channel list for full info. You can use Sling TV on your mobile devices, computers, Xbox consoles, or with Roku, Chromecast, Apple TV, or even Amazon Fire TV devices. All plans include an on-demand library and TV Everywhere app access, though app access may be limited compared to some services. If you want a cloud-based DVR that will be an additional fee.

Choose from four packages with plenty of options

DIRECTV NOW offers 65+ channels for $40 per month, with no contract required. In the basic package, ESPN2 is included. Three other larger packages are available, and in those packages, you can also get CBS Sports Network. DIRECTV NOW does not offer FOX College Sports, at this time.  Other channels you might have include AMC, ESPN, TNT, NBCSN, USA, FX, and many other channels. TV Everywhere apps can also be used. These apps, like the ESPN app or FOX Sports Go will allow you to sign in with your DIRECTV NOW credentials to watch additional live and on-demand content. An on-demand library is also included in your package.

A Cloud-Based DVR is Included with Limited Space

You can use DIRECTV NOW on most of your favorite devices, like Chromecast, Apple TV, PC/Mac, and iOS/Android devices. Amazon Fire TV devices and Roku work with DIRECTV NOW, as well. You can record TV and possibly even the MAC Tournament live stream with the cloud-based DVR. Remember, there are no contracts with DIRECTV NOW, so you’re free to cancel whenever you want! Check our DIRECTV NOW review for more info.

Click here for a free 7-day trial of DIRECTV NOW

YouTube TV has Some Channels to Watch MAC Tournament Online

Sports is just some of what YouTube TV has to offer

YouTube TV is similar to many of the services here in that you can get both ESPN2 and CBS Sports Network with their package, but not FOX College Sports. Still, this gets you some of the games, including the MAC Tournament championship live stream. It’s a lot cheaper than cable, at only $40 for more than 50+ channels. And, there’s no contracts, so if you don’t like it you can cancel whenever you want. You’ll have a lot more than just sports with all kinds of channels for everyone in the whole family available!

YouTube TV includes a cloud-based DVR with their package that offers unlimited space. This is great for people that like to watch shows all at once or that just aren’t able to watch their favorite shows live. Recordings are kept for nine months unless you delete them first, so you’ve got time to watch them when it’s easy for you. YouTube TV doesn’t work on Amazon Fire TV devices, but it will work on Chromecast, computers, mobile devices, Apple TV, and Roku. If you want to learn more, visit our YouTube TV review.

PlayStation Vue offers four packages. All of the packages offer ESPN2. The smallest package is $45 and includes 50+ channels. Larger packages, starting at $50 per month include CBS Sports Network and FOX College Sports. There are also additional channels that can be added to any package for a small fee. Many other channels including AMC, USA, TNT, Bravo, MSNBC, Food Network, and more are available. Plans also include an on-demand library and give you a chance to use TV Everywhere apps with your PS Vue account.

You Don’t Need a PlayStation to Use PS Vue

Also included in your account is a cloud-based DVR. You’ll have 28-days to watch your recordings before they are purged from the system. This is a great tool, especially if you’re worried you’re not going to be able to catch something live. A PlayStation can be great fun, but they aren’t required to use PS Vue. While PS3 and PS4 can stream PS Vue, you can also use Chromecast, computers, Apple TV, mobile devices, Fire TV, Roku, and other devices. You can learn more in our PS Vue review.

Remember to sign-up to try the 5-day PS Vue trial.

ESPN+ is ESPN’s new streaming service. Keep in mind that service is seen as an addition to the content that you’d see on ESPN. You won’t be able to watch games that air on ESPN with ESPN+. Instead, ESPN+ will offer dozens of sporting events from plenty of different sports throughout the month. You’ll be able to watch NCAA sports, rugby, soccer, boxing, international sports, and much more. It certainly wouldn’t work as someone’s only streaming service, but if you want a way to watch MAC Tournament online in its entirety, you’ll need ESPN+ to do it.

From Boxing to College Basketball ESPN+ Offers Everything Sports 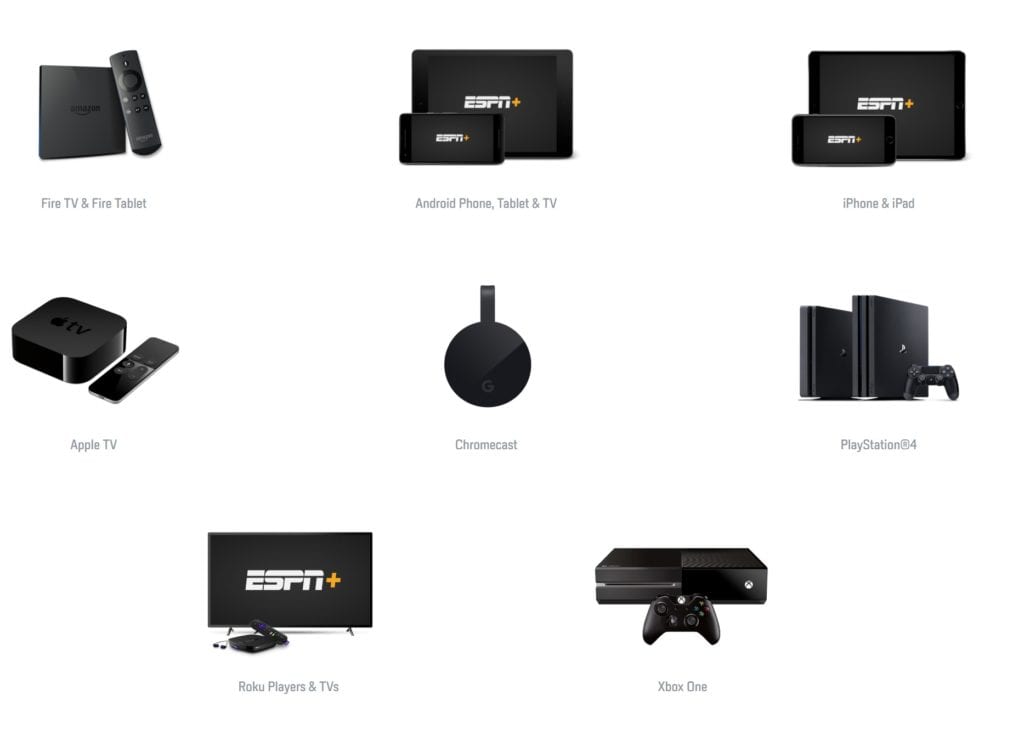 You’ll be able to stream the MAC Tournament live stream on Apple TV, Amazon Fire TV devices, Roku, Chromecast, iOS devices, and Android. Most devices will allow you to stream ESPN+. For $5 a month, this makes a great addition for sports fans. You’ll also have an on-demand library offering all kinds of sporting content from documentaries to sporting events.

We’ve even got a ESPN+ review where you can learn more.

The MAC Tournament is sure to be an epic event – and it’s even more enjoyable to watch when you don’t have to pay a fortune for cable TV! For more info on watching basketball online, head over to our March Madness live stream and NCAA basketball live stream guides.